Image resolution can have several meanings. It is a central question for many tasks that require a high data quality. But what is a good resolution? How to quantify it? Is it just a question of camera, or is it also related to your piloting skills and using your drone the right way?

In this article, we present three important metrics to describe the resolution of a drone camera. To illustrate these concepts we will refer to products we know best, the camera of our drones: Elios 1 and Elios 2.

The image resolution indicates how big is the image, but considered alone, it does not tell much about how big an object appears in the image, or what is the level of detail that you can observe in the image. To answer these questions, we have better metrics, such as the ground sampling distance and the spatial resolution.

The ground sampling distance (GSD), in mm/px, is the distance between the centers of two adjacent pixels, measured on the observed object. A GSD of 1mm/px means that one pixel on the image represents 1 mm in the real world. A smaller GSD means that object will appear bigger, and that smaller details will be visible in the image.

Unlike the pixel resolution, the GSD depends on the distance between the camera and the subject: the GSD improves (smaller values) when the camera comes closer to the objects. With a fisheye lens, the GSD also depends on the position of the object within the image. Objects in the center of the image have a smaller GSD (they appear bigger) and objects in the corners have a higher GSD (they appear smaller).

This figure shows how the GSD varies in the image, when the Elios 2 is facing a planar, vertical wall. It was obtained by automatically measuring the size, on the image of a regular grid pattern on the wall.

The ground sampling distance is an important metric to consider for photogrammetry and measurements in the images. However, it does not fully describe the ability to detect and characterize an object or defect in an image.

Consider two images taken by the same camera and at the same distance to the scene. Both images have the same pixel resolution and GSD. However, in one case the lighting was insufficient and the camera had to increase either the ISO value or the exposure time to keep a correct exposure. High ISO produces image noise, and long exposure time produces motion blur when the camera moves. This reduces the image quality, and eventually the ability to distinguish small details in the image. 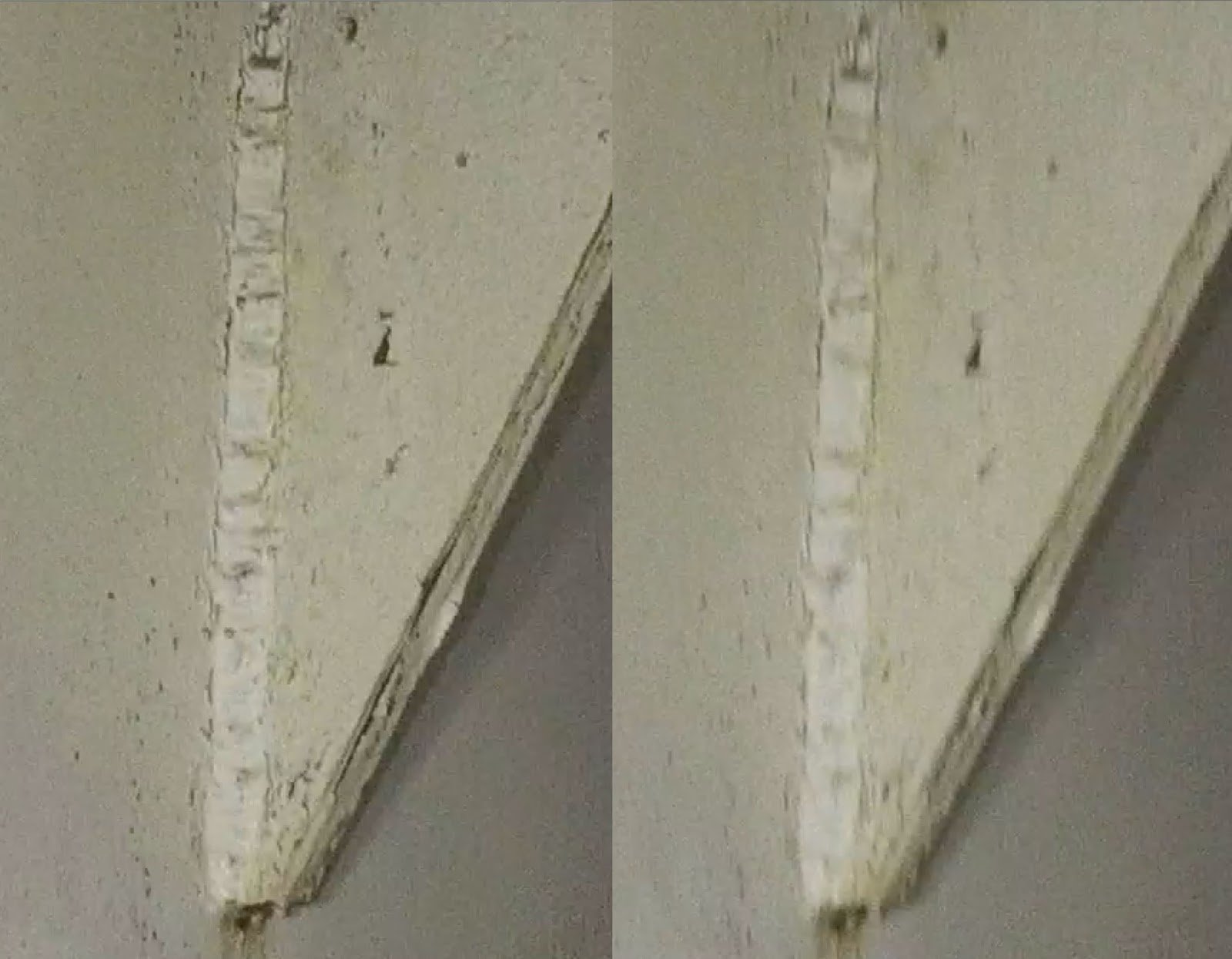 The two images at the top have the same pixel resolution and the same GSD - they have been taken by Elios 2 at the same distance. On the close-up views (bottom), we see that the image on the right is affected by motion blur, reducing the level of detail in the image compared to the left image, where the drone was stable.

The spatial resolution is often expressed in “line pairs per millimeter”. This unit is used to describe the spatial frequency of alternating black and white line patterns.

A spatial resolution of 2 lp/mm indicates that a pattern with two cycles per millimeter (two black and two white lines) can be distinguished on the image. A pattern with a higher frequency will appear gray, because the black and white lines will mix together in the image. In this case we say that the pattern is not resolved.

Snapshot of an image taken by Elios 2 (4K video) at 300 mm from a USAF 1951 resolution chart. The smallest resolved element is element 1, groupe 1 (indicated by the green arrow). In element 2 (just below), the contrast starts to decrease significantly and the individual lines cannot be distinguished.

To get the best spatial resolution and for the reason mentioned above, it is very important to know the shortest distance allowed by the focal of your drone camera and to remain at this distance during your data capture. To help the pilot fly at the optimal distance from an inspected object, the Elios 2 features the distance lock function and Cockpit (Elios 2’s Control Control Station’s application) displays the drone-to-object distance and the resulting GSD (in mm/px). The spatial resolution is indicated by the mean of a color code, as explained in the table below.

Note that small screens reduce the perception of image blur, because the image is downscaled to the screen resolution. In the case of Elios 2, you may be tempted to fly at 15-20 cm without noticing the image blur. But keep in mind that your recorded 4K footage will be sharper and more appealing if you stay at 30 cm.

In addition to an appropriate distance, following conditions improve the spatial resolution and the image quality in general:

The spatial resolution is an important metric to assess the image quality and the ability to detect or characterize objects of interest during a visual inspection. However, other factors also play an important role:

The points mentioned above really go beyond camera resolution alone and must be addressed by the UAS (Unmanned Aerial System) as a whole. The small size of Elios 2 and its collision tolerance allows it to access the object and observe it from various angles of view. Also, its advanced lighting system can enhance the perception of 3D details and ease the detection of cracks, holes or asperities. Definitely, these features make a good part of Elios 2 ability to detect and characterize your objects of interest.

With some practice, you will improve your piloting skills and you will focus your attention on the data capture rather than navigation. Keeping in mind the concepts explained in this article, you will greatly improve the image quality of your footage.

Each industry has its own requirements regarding the image quality. If you have made experiments to compare the different tools you are using, or if you have feedback regarding Elios 2 image quality, please don’t hesitate to reach out!