One of the largest agricultural businesses in the world tested the Elios 2 for the visual inspection of its grain bins and found that the drone could significantly improve safety and help the company save $9,000 per inspection.

At big companies, one small improvement can represent huge savings when iterated throughout the entire organization’s work.

Take the case of grain bin inspections—grain bins are typically inspected in-depth every 4-5 years, but they are visually inspected once a year. To gain access to the bins, inspectors usually use ropes to rappel into them, as well as walking on temporary scaffolding erected within the bins.

For a large company that conducts hundreds of these inspections a year, any improvement made to its inspection processes could mean huge savings.

Recently, one of the largest agricultural businesses in the world decided to investigate new technologies to streamline its regular grain bin inspections. In its research, the company learned of Flyability’s Elios 2 and decided to test it to see how effective it might be for inspecting a grain bin.

[Grain bins vs. grain silos. Grain bins are large structures that are typically silver and made of corrugated steel, and house dry grains such as corn or soybeans. Grain silos, on the other hand, are typically tall, skinny structures made to hold silage (grass or other fodder that is harvested green and wet, and primarily used as feed for dairy cattle).]

Searching for ways to make its operations safer and more cost-effective, a large company that works in food storage and transportation began seeking new technologies for grain bin inspections. 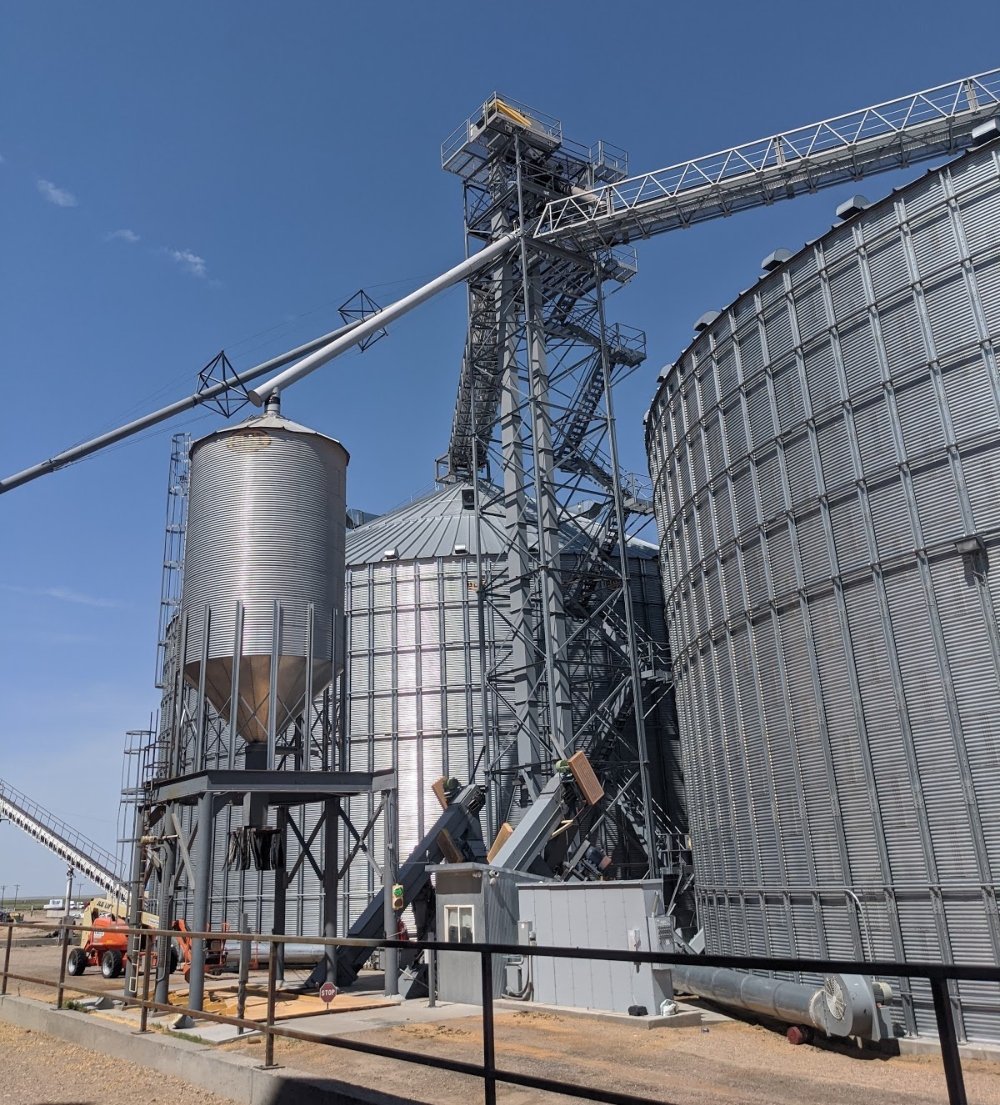 The goal of grain bin inspections is to review the bins thoroughly so that any potential problems can be identified before they get worse, and require costly fixes or present safety hazards to employees.

Grain arrives at a site on trucks. After delivery, the grain is probed for its temperature and then, depending on the reading, is moved to a specific grain bin (also called a tank) for storage.

Once the grain has been moved to the bin it will sit there in storage until the price for that particular grain—be it corn, soy, or some other type—is right for the company to sell it. At that point, the grain will be loaded onto trains located on-site and shipped to its purchaser.

Grain storage sites can be incredibly busy, especially during harvest season, with trucks arriving and departing constantly, which means that every second of downtime required for an inspection could potentially cost the company money.

The company also wanted to improve safety. Accidents—and even fatalities—do happen in grain bins, and its goal was to eliminate these kinds of incidents altogether.

In addition to these concerns, the company faced operational challenges due to social distancing measures required by the ongoing global pandemic. By testing a drone for grain bin inspections, it hoped to learn more about how drone technology could support the new safety measures required to prevent the spread of COVID-19.

To try and improve its grain bin inspection processes, company personnel tested the Elios 2 at two different grain bins on the same site.

Here are the tasks that the drone was used for during the test: 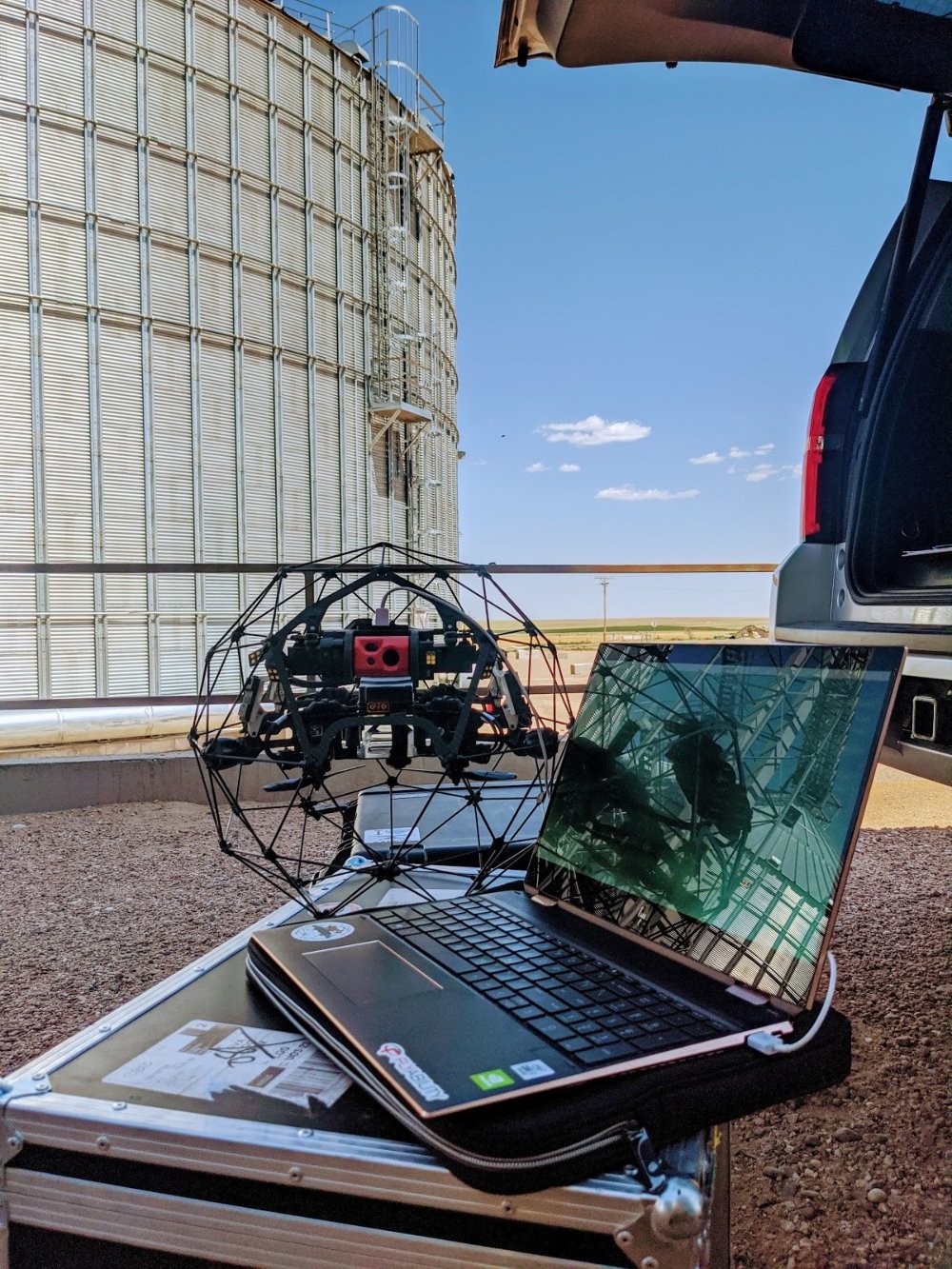 The test flights were found to be very successful, with the Elios 2 helping inspectors to identify several defects and areas where work was required.

Despite a strong wind on the day of the test flights, which created challenging conditions for flying, the Elios 2 was able to collect all of the visual data required for a full visual inspection. 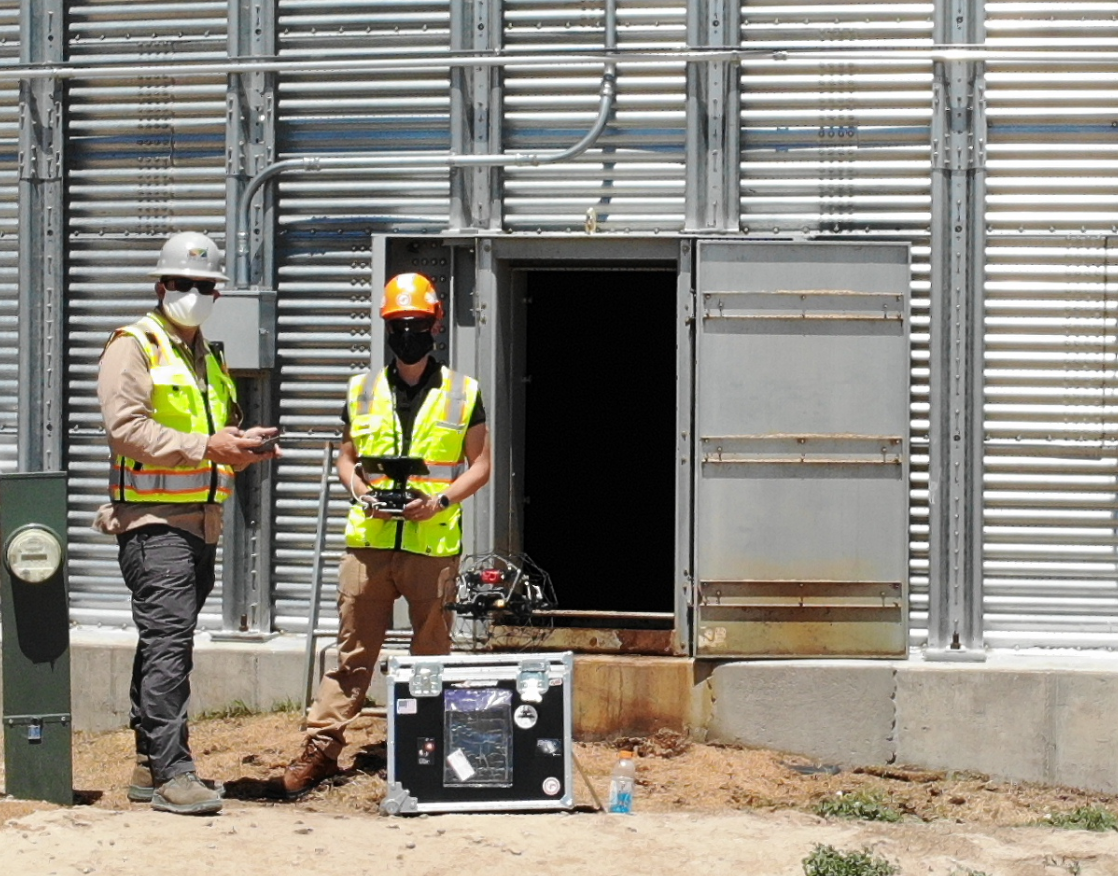 The quality of the data was quite high, and sufficient to completely replace the need for an inspector to physically enter the grain bin for the additional collection of visual data.

"For these grain bin inspections, the POIs [Points of Interest] taken in flight have almost more value than the video footage since they provide a high-quality overview of the condition of various parts of the bin.”

Here are the steps taken to inspect one of the grain bins:

Following these flights, inspectors reviewed the visual data collected and were able to draw several useful conclusions, some of which are shown in the images below. 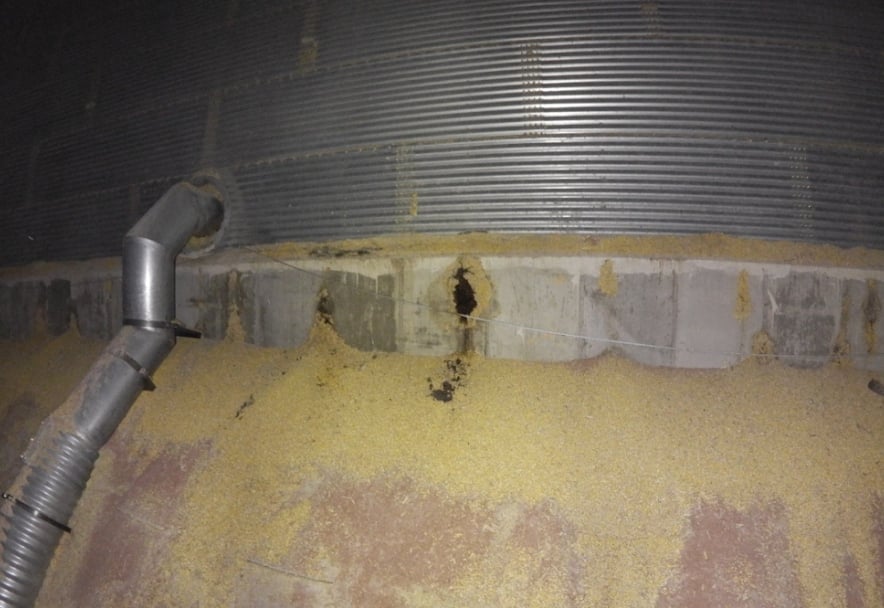 Corrosion inside a grain bin: 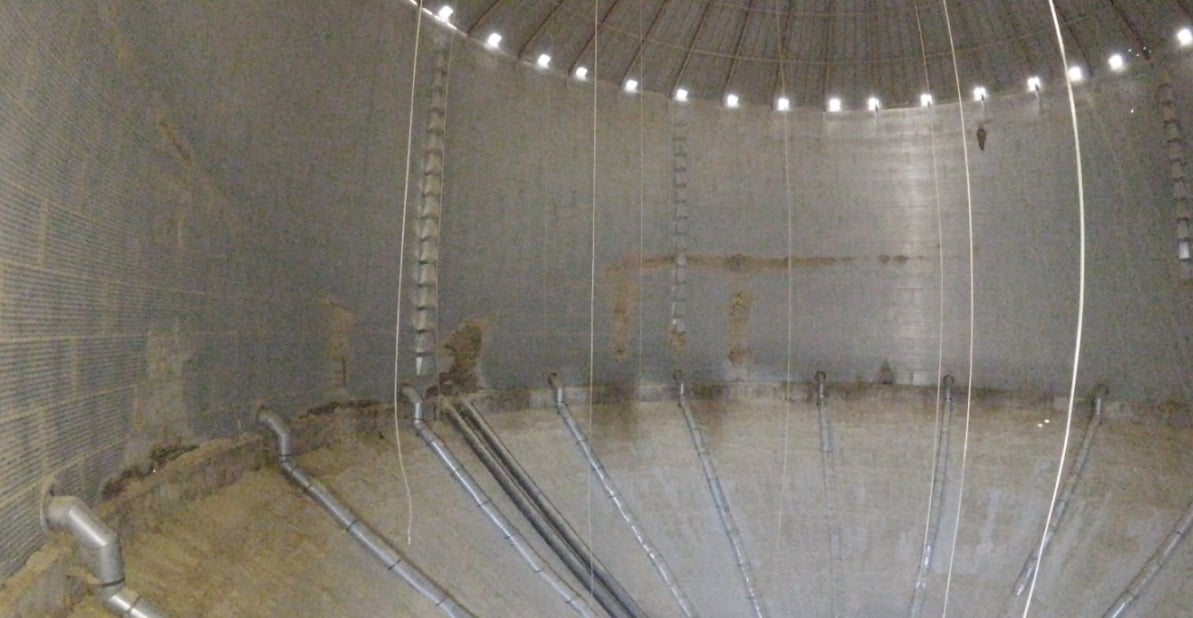 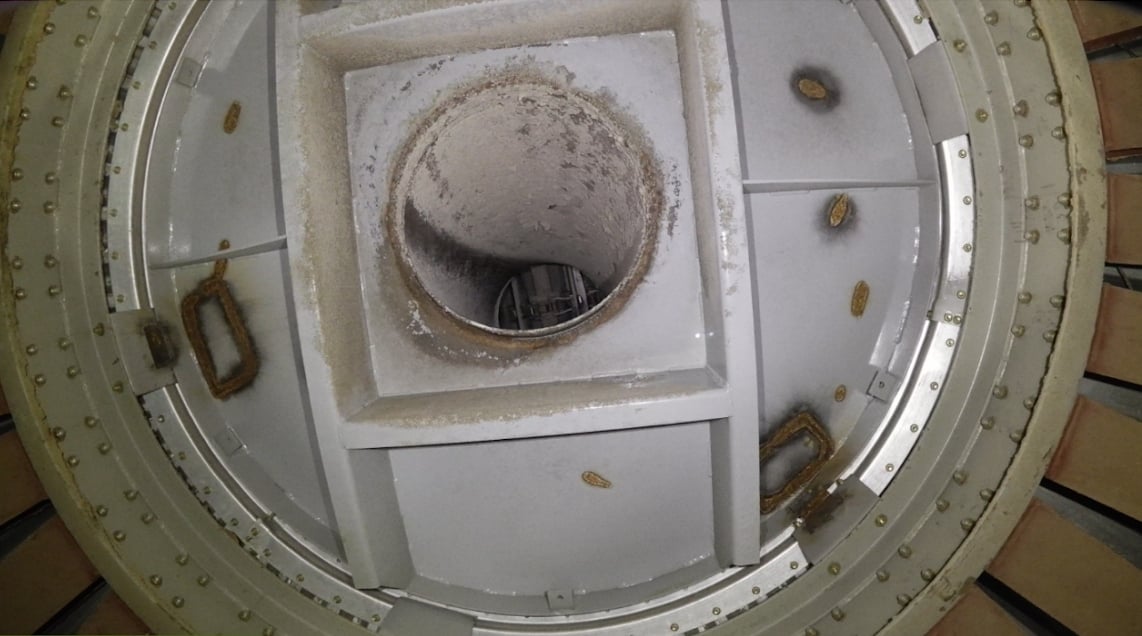 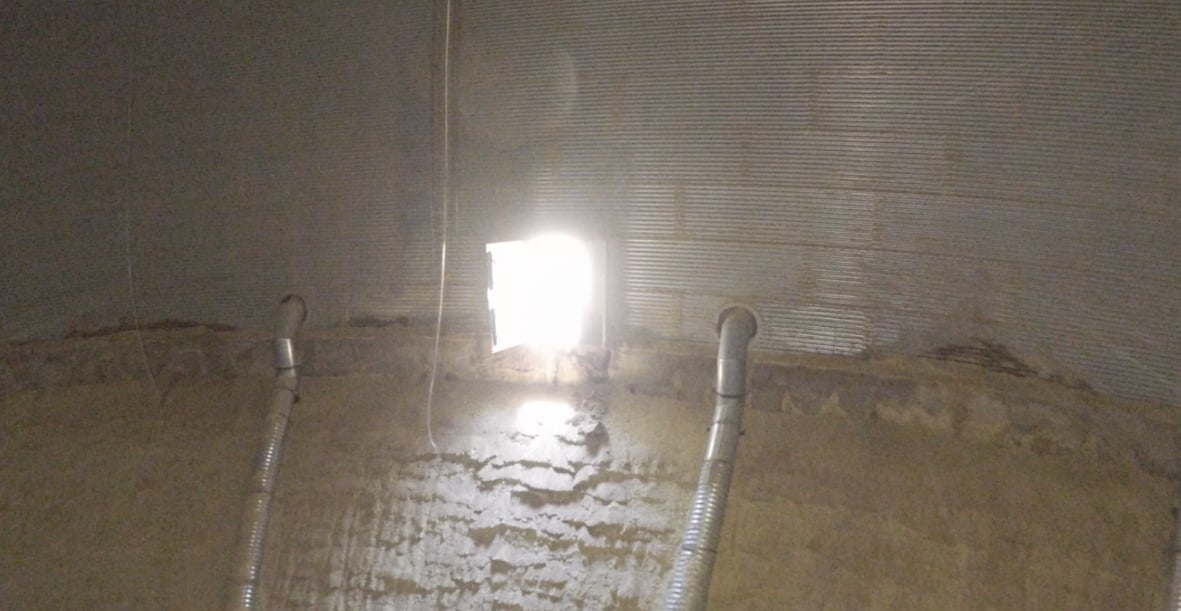 Given the success of the tests, the company is planning to move forward with using the Elios 2 for more grain bin inspections, as well as testing it for supporting other aspects of its operations.

Personnel at the company estimate that using the Elios 2 for all of its grain bin inspections throughout the world could help it realize an annual savings of $2.5 million.

But this kind of rollout will take time. For now, those overseeing grain bin inspections at the company are happy to have found a new solution that has the potential to make visual inspections safer, while also helping the company realize significant savings.

Elios was used to complete a complex indoor ceiling inspection over the factory floor in the Pilsner Urquell brewery, in less than half the time of […]