Elios was used to complete a complex indoor ceiling inspection over the factory floor in the Pilsner Urquell brewery, in less than half the time of traditional methods and without shutting down production.

The team at Drony SITMP, a drone service provider, Flyability reseller and innovation center based in the Czech Republic, used Elios to inspect the ceiling trusses and beams over the bottling plant at the Pilsner Urquell brewery. Collision-tolerant Elios was able to navigate electrical wiring, scaffolding, vents and other obstacles to get a close look at the beams and trusses that required inspection. The mission saved their customer over 3 weeks of inspection time – without requiring shutdown of the bottling facility. 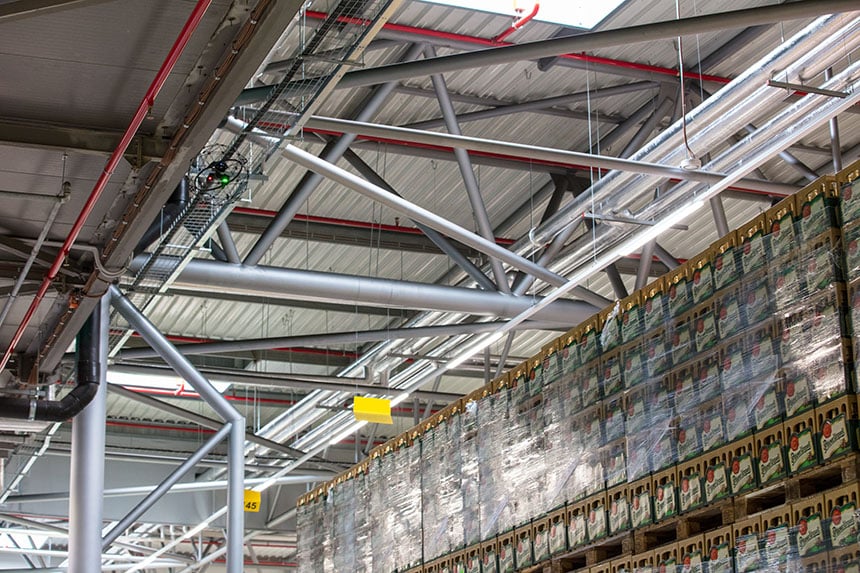 At 60,000 bottles per hour, disruption of bottling for an entire month represents a significant burden for the company. Elios was the right solution for their situation.

Pilsner Urquell is one of the most popular beers in the world, and their state of the art plant in Pilsen, Czech Republic, is at the heart of their operations. The plant, constructed 10 years ago, produces a stunning 60,000 bottles of beer per hour with only about 50 workers on the floor during each shift.

Building regulations require that the ceiling of the facility be inspected each year, and a detailed inspection be performed every 10 years: this was the first year requiring a detailed review. Inspecting the 30,000 square meters (nearly 7 and a half acres) plant is no small project. Made up of 16 trusses each 90 meters (about 300 feet) long and 4 beams each 100 meters (about 330 feet) long, the ceiling environment is made more complicated by the many obstacles that are suspended from the framework. Electrical wiring, hanging lights, air circulation equipment, noise barriers, and sprinklers all create challenges for inspections.

Typically, the inspection is performed by a team of 5 workers who climb up to the ceiling to inspect the beams and trusses. This is dangerous work, and that danger must be mitigated by hanging a safety net beneath all of the workers in case of a fall. Hanging the safety net and setting up the scaffolding structure for the climbers is time consuming; previous inspections have taken the company over 1 month to complete as the climbers work in small sections of the floor. Even with the scaffolding and safety net, climbers are simply not able to work around the obstacles and get close enough to some areas of the ceiling to make a detailed inspection.

Not only is the work dangerous and time consuming, it is also extremely costly. During inspection, the bottling production must be stopped in the area that is being inspected. While the company doesn’t release exact figures, reducing the production of 60,000 bottles of beer per hour for over 35 days is an expensive proposition.

The team at Drony SITMP, accompanied by a building inspector to direct the team to places of interest, used Flyability’s Elios drone to fly underneath the ceiling. The team pilot flew between the trusses and beams in difficult spaces. Elios was able to capture footage of critical structural elements while not interfering with electrical wiring, sound barriers, sprinkler equipment, and hanging lights.

The Elios pilots - one to fly, one to change batteries and spot the flight - worked for 4-5 hours per day for a total of 12 days. The team took specific footage of construction elements like bolts and checked the structure for any signs of rust, corrosion, or possible contamination. 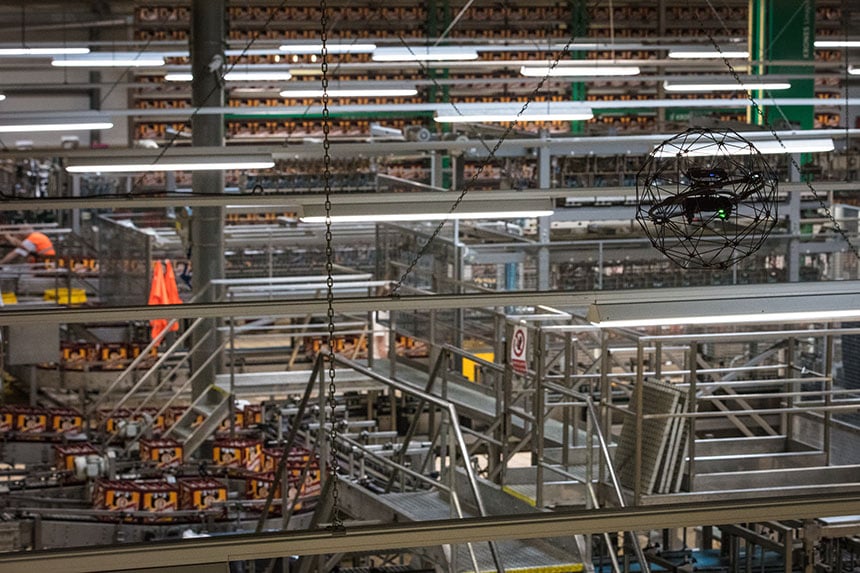 Using Elios instead of a climbing team provided the company with major time and cost savings, and provided a better and more detailed inspection report. The drone required no scaffolding or safety net, and did not require shutdown of the bottling operations below.

Estimating figures based on the average salary in the area1, the project saved the company over $6,000 in staffing costs. But the real savings came in eliminating production downtime. At 60,000 bottles per hour, disruption of bottling for an entire month represents a significant burden for the company. The company management was instantly interested in pursuing a method of inspection that didn’t require stopping production, Ondrej Bouček, drone expert at Drony SITMP. “The drone was exactly the solution for their situation,” he comments.

Additionally, the drone allows the inspector to see inaccessible areas better. Elios was able to gather footage of corrosion and damaged or missing bolts, allowing the inspector to provide the company management with a full, detailed report of the repairs required. “Pilsner Urquell were really pleased with the results of the flights,” says Bouček. “Elios provided benefits in safety, downtime, and mainly cost… They are also proud to be the first in the Czech Republic to use this method for roof inspections.”

Elios’ collision-tolerant design was the perfect tool for inspecting a complex ceiling environment over the bottling production floor at Pilsner Urquell. Eliminating over 20 days of lowered production time, staff costs for a large team of climbers, and the time to set up and dismantle safety nets and scaffolding added up to minimal disruption and a significant cost savings for the customer. Pilsner Urquell is now planning to expand the drone program to other locations.

“This is the plan going forward,” says Bouček. “We’ll be doing more and more of these.” 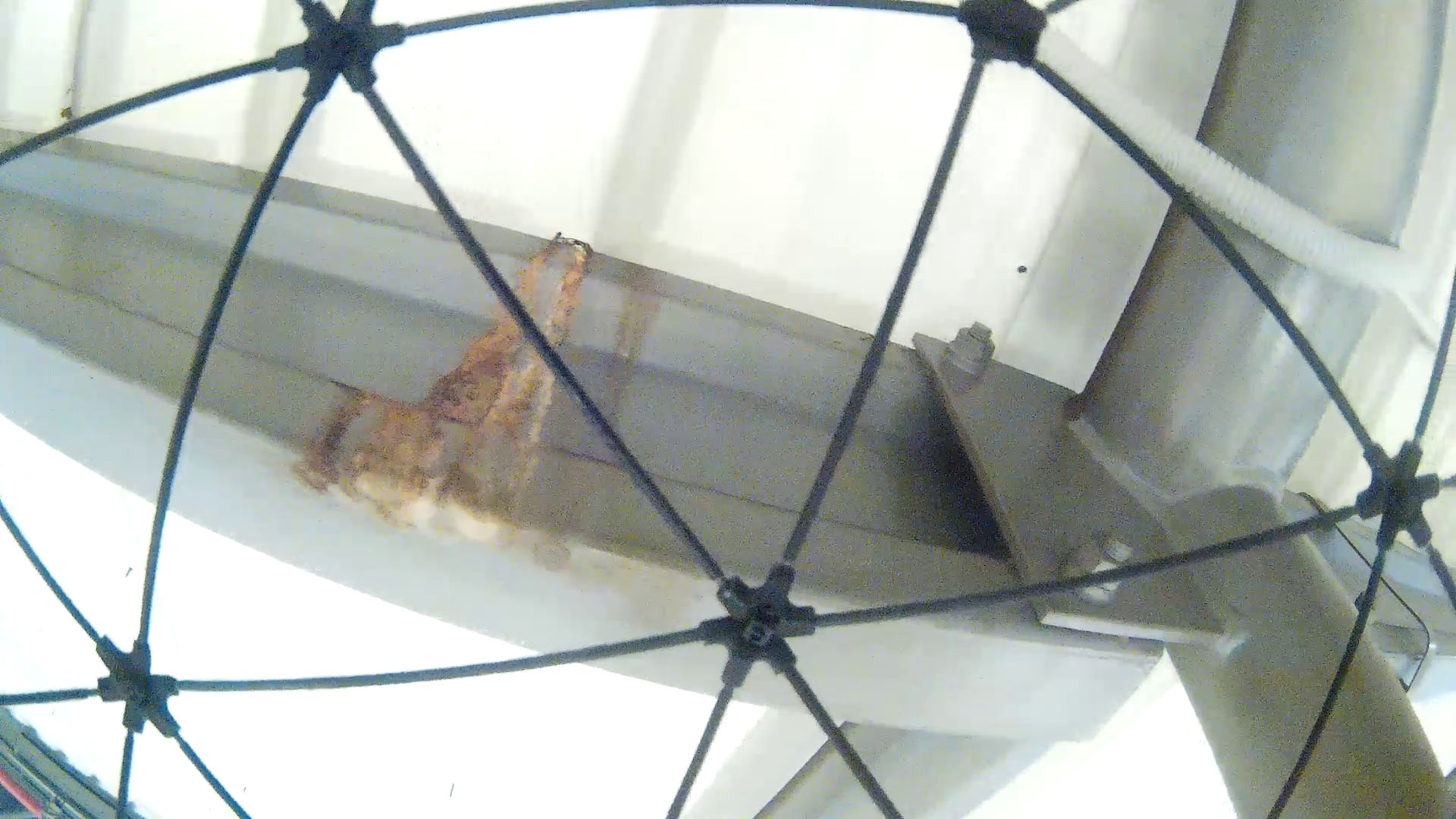 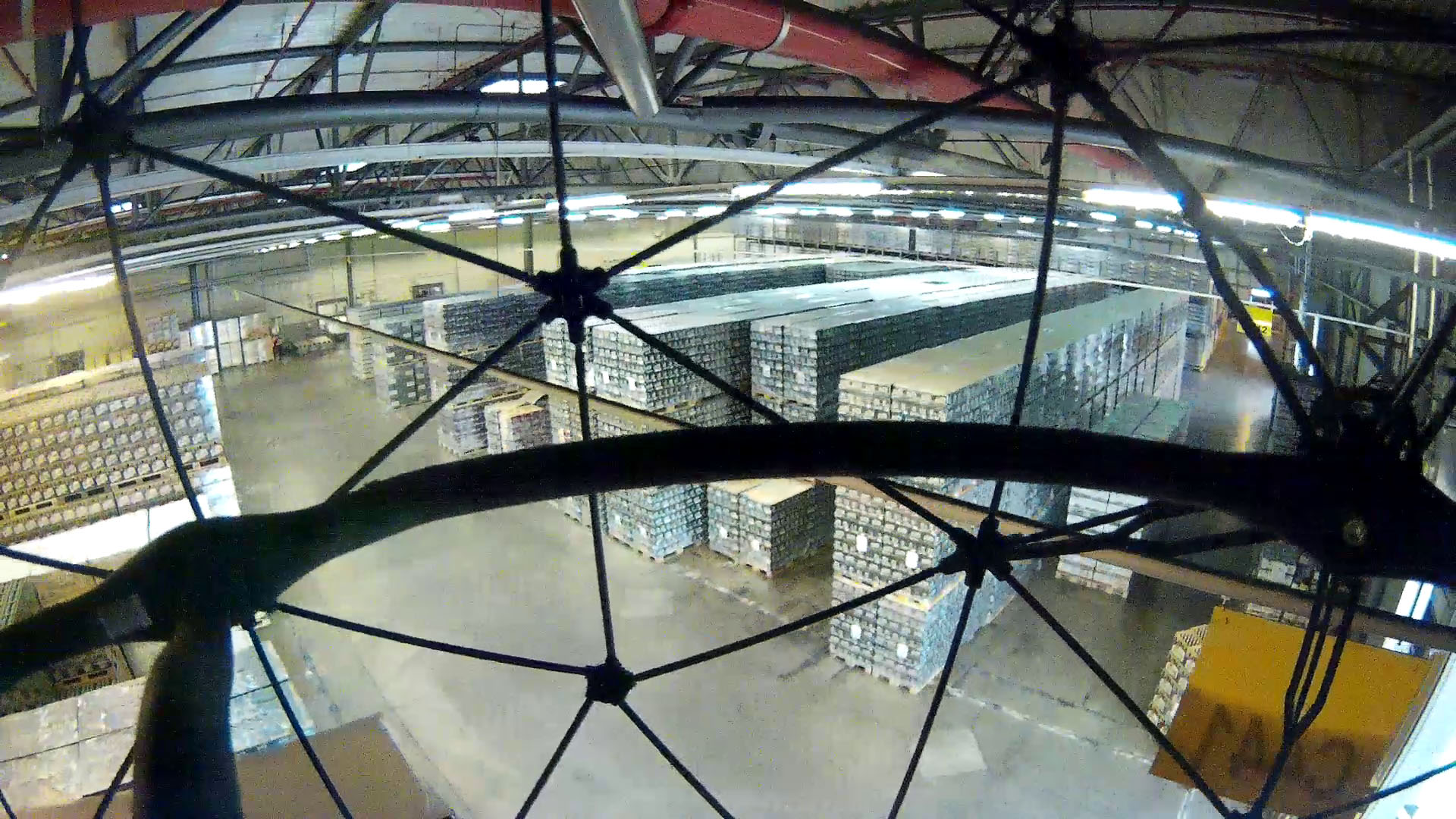