Sewer Inspections in 2022—Everything You Need to Know

Sewer inspections are an important part of maintaining sewer systems, both for cities and for homes—learn more about how they're being conducted in 2022.

Sewer inspections are an important part of maintaining sewer systems, both for cities and for homes.

As you may know from experience, a problem with a sewer system can develop into a major emergency in seconds, with water—or worse, raw sewage—suddenly pumping into areas where it shouldn’t be due to a damaged pipe or some other issue.

City sewer inspections help address these kinds of emergencies by sending sewer line inspectors into large pipes and other wastewater infrastructure to identify the root cause of a problem.

In these types of inspections, where the assets being inspected are big enough for a person to fit into them, caged drones like the Elios 2 and Elios 3 can often take the place of the person.

Using a drone, sewer line inspectors can collect visual data to better understand the condition of a pipe in order to diagnose a problem, or simply to ensure that there are not any potential issues present. Here is a table of contents in case you would like to jump around within the article:

In sewer inspections, sewer line inspectors typically collect visual data to assess the condition of a pipe or some other part of wastewater infrastructure.

There are two main reasons to conduct a visual inspections of a sewer:

2) As part of routine maintenance, in order to avoid a sudden emergency down the road.

Reason 1: To fix a sudden sewer problem that has created an emergency.

This is a common reason for a sewer inspection to occur, either within a home or within a city’s wastewater infrastructure.

In either case, the situation is basically the same. From the outside, you can tell that something is wrong with the sewer system by the symptoms presented, but you’re not sure exactly what is causing the problem.

In the case of a home sewer system, these symptoms could be water getting backed up in the sink, or water burbling in a toilet.

In the case of  a city’s sewer system, these symptoms could be much bigger, like a large amount of sewage suddenly appearing in a body of water.

In either case, a sewer inspection or drainage inspection is required immediately in order to find the cause of the problem and fix it.

Reason 2: To identify potential problems and address them as part of routine maintenance of wastewater infrastructure.

Sewer inspections may also be conducted proactively, as part of a  regular maintenance cycle for wastewater infrastructure.

As sewer systems age throughout the world, the likelihood that they may begin to fall apart increases by the year.

In order to identify areas of concern within a sewer network, cities all over the world conduct regular sewer inspections, as well as regular cleanings, as part of the overall maintenance of their sewer systems.

Watch this video to see how a routine sewer inspection is conducted by drone:

Want to know how often cities conduct maintenance procedures, including sewer inspections, of their wastewater infrastructure in the U.S.?

Here is a breakdown of frequency from the American Society of Civil Engineers (ASCE): The basic idea of a sewer inspection is to collect visual data by doing a sewer scan on the conditions of the sewer system, regardless of whether the system being inspected is a home sewer system or a city’s sewer system.

That being said, there are some important distinctions between home inspections and city inspections, which we cover in the two sections below.

[Related read: What Is a Sewer Scope Inspection?]

Home sewer inspections are performed for the same two reasons listed above—either because a major emergency has arisen, like a flood in the kitchen, and the reason for it needs to be identified, or because the homeowner wants to learn about potential problems in their plumbing before they develop any further.

As the inspector runs out the snake line, the camera records everything within the pipe. The footage is then reviewed to try and discern the cause of any issues in the plumbing, like cracks in the pipe, the presence of roots, clogs, or collapsed lines.

Note: Running a camera through a pipe is also called a sewer lateral inspection.

One reason for this is simply because the pipes being inspected are bigger—often big enough for a person to fit inside them.

Historically, the only way to inspect these pipes is for inspectors to enter them physically with a flashlight, carefully traversing the pipe and studying every square inch of it with the naked eye. But new technology now allows inspectors to capture high quality visual data on the conditions within sewer pipes without having to enter them—we’ll cover this information in the section on how drones are helping with sewer inspections below. Here are the main techniques used in city sewer inspections:

Inspectors physically enter pipes to inspect them with a flashlight.

Visual inspections can also refer to inspectors looking at the conditions surrounding a pipe or other components in wastewater infrastructure. CCTV is commonly used for narrower pipes (4-48 inches in diameter), which are too small for an inspector to enter.

In a larger sewer system, a remotely controlled CCTV camera and its accompanying lights are attached to a raft, which is then floated between manholes inside a pipe while the camera is swiveled in the vertical and horizontal planes for full visual coverage of the pipe. In smaller sewers, the camera and lights can be attached to a sled.

The output of CCTV camera is a video recording with visual data on the condition within the pipe. Once the visual data is collected inspectors can review it to conduct a thorough visual inspection of the pipe and draw conclusions about possible maintenance needs.

Camera inspections can also be done using a similar approach as that taken with a CCTV camera, where a camera is placed on a raft or sled and floated along within the pipe.

A lamping inspection refers to a sewer inspection in which a camera is lowered into a maintenance hole and positioned at the center of the meeting place between the sewer line and the manhole opening.

Using this positioning, inspectors can collect visual data on the inside of the pipe and then review that data later.

Lamping inspections produce the lowest quality of visual data, and thus are only used on low priority pipes (this usually means newer pipes, which are less than 20 years old), or in projects where funds are extremely limited.

Indoor drones are revolutionizing sewer inspections, allowing inspectors to improve safety, save money, and reduce response time in the face of emergencies. 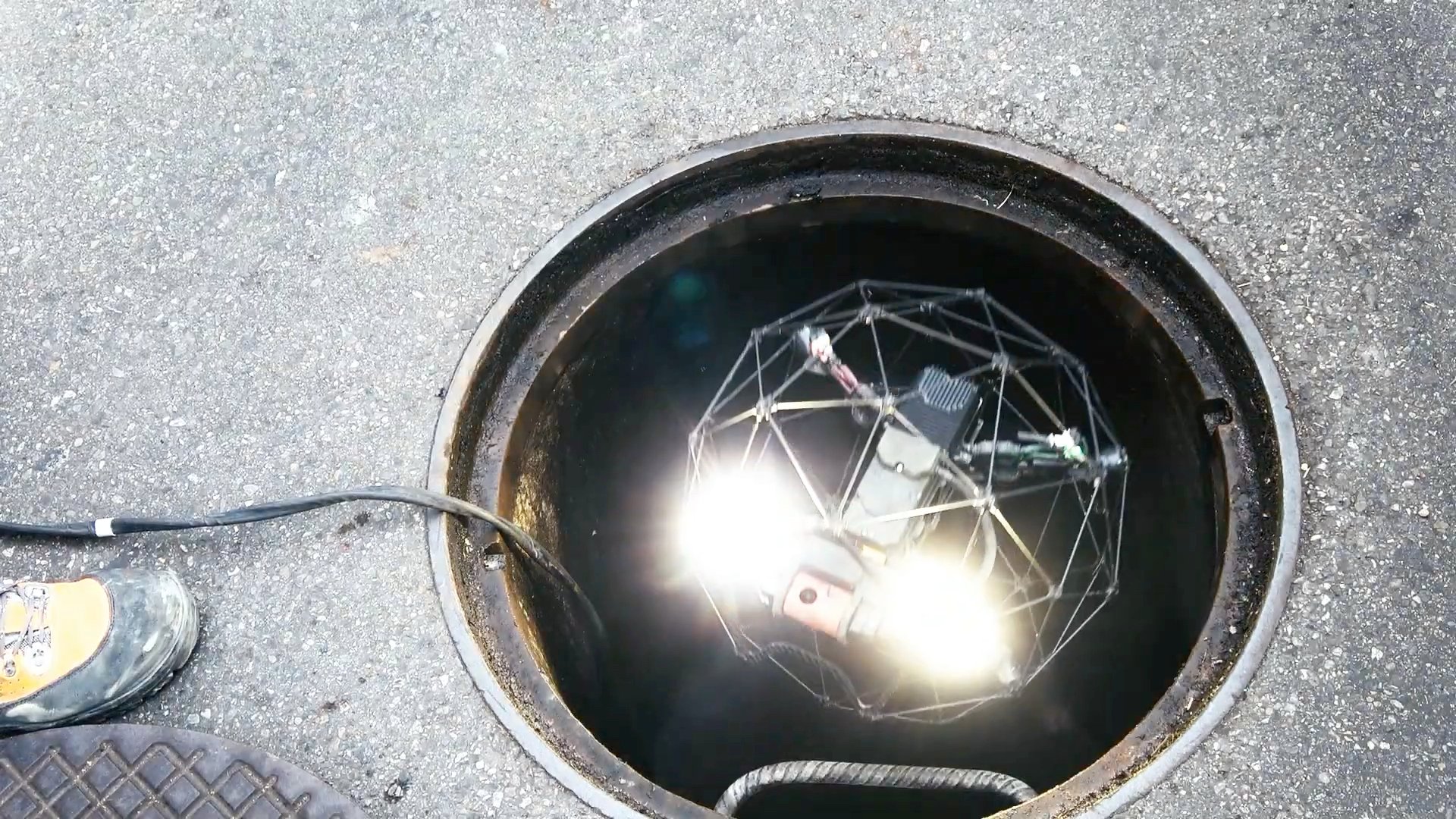 By removing the need for inspectors to physically enter confined, potentially hazardous spaces, drones made for flights in confined spaces like the Elios 2 are helping keep inspectors out of harm’s way, and increasing the overall safety of sewer inspections.

For the City of Lausanne, the Elios 3’s 3D maps pinpoint the precise geolocation of defects found during inspections of the water department, allowing inspectors to return to that location for future monitoring of defects.