Flyability’s Elios drone was used to inspect the infrastructure at West Edmonton Mall’s World Waterpark and Mindbender roller coaster. Due to the Elios’ unique ability to fly in confined spaces, personnel from WEM, INTECH NDE (Flyability reseller and flight training partner), and Applus (the contracted inspection partner for the mall) were able to look much more closely at the infrastructure supporting the park’s attractions than they ever had before, cutting inspection times from 10-20 hours to just 1-2 hours, and potentially reducing the cost of inspection by more than 80%.

WEM personnel found that not only did the Elios help make inspections faster, safer, and more economical, it also allowed them to see things they had never been able to see before. Even with the help of scaffolding, parts of the infrastructure in both World Waterpark and Galaxyland are difficult or even impossible to inspect using manual methods, but with the Elios they were able to fly into these tight, high spaces and get a close look at every nook and cranny. 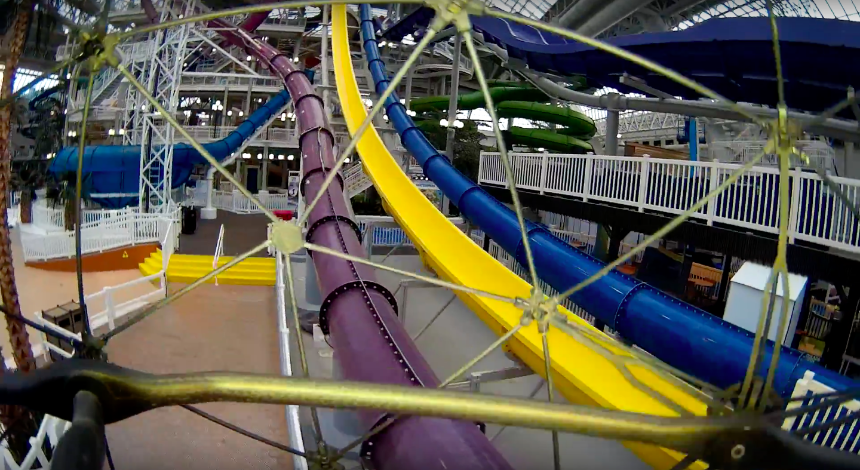 Both Galaxyland and World Waterpark receive thousands of visitors every day, which means that safety is a high priority for the team tasked with managing the two parks.

A crucial part of keeping visitors safe is conducting regular inspections of the infrastructure at both facilities. These inspections serve to identify areas where maintenance is required so that work can be performed and accidents prevented.

But inspecting roller coasters and waterpark rides can be incredibly challenging, not to mention costly. One of the primary struggles in managing huge, physically complicated assets like these is that it is usually not practical to inspect every square inch of the structures and rides.

For instance, to conduct an inspection of a taller part of a ride—say, something that stands 15 meters (49 feet) in the air—or of the structure supporting it, an inspection team must first rent and erect scaffolding, and then have an inspector climb up the scaffolding.

To continue with the inspection in a systematic manner, the scaffolding must then be taken down and rebuilt before the next area can be inspected, which is a time consuming and expensive process.

“We have so many places in these two parks that we can't physically get up to in order to do an inspection. Just to take a look at them we have to erect scaffolding or get people on ropes to access the area, and that's just preliminary—just to determine if there's even a problem. This is really hard when you’d like to have quick answers, and know immediately how things are looking.“

In addition to being slow, costly, and potentially dangerous, manual inspections are limited in where they allow inspectors to go. Even with the use of scaffolding, ropes, and booms, there are still parts of both the World Waterpark and Galaxyland that are too high or too confined to be inspected using a manual approach.

Using the Elios, a certified drone pilot from INTECH NDE conducted a visual inspection of key parts of the water rides in the World Waterpark and of the Mindbender roller coaster in Galaxyland.

West Edmonton Mall staff, the INTECH NDE pilot, and a member of Applus, the company charged with conducting inspections at the mall, watched the live feed from the Elios so that they could identify areas of the assets being inspected where maintenance might be required. 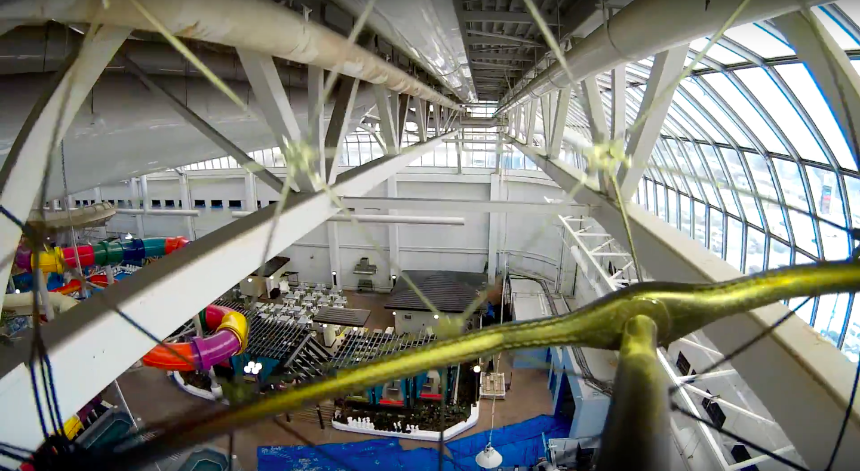 The Elios allowed for inspections of key assets in both World Waterpark and Galaxyland to be conducted in approximately 10% of the amount of time a manual inspection typically requires.

Using the Elios was also much less expensive than a manual approach. With the Elios, costs were reduced from about $68K USD to $11K USD, for a savings of $57K USD, or 84% of the original cost.

In addition to saving money and increasing efficiency, using the Elios meant that no one had to climb scaffolding to perform a manual inspection, leading to a reduction of potential exposure to harm for inspection personnel.

The benefits of using the Elios instead of a manual approach to inspect the water rides in the World Waterpark and the ride attractions in Galaxyland were so significant that leadership in West Edmonton Mall has expressed interest in using the drone to make inspections throughout the entire mall, which covers an impressive 490,000 square meters (5.3 million square feet)

“I think using the Elios is not only going to be beneficial for our two parks but also for the entire mall. We’ve got a lot of other high, hard-to-reach spots where I’d love to get a visual. We have an ice rink where I’d like to look at the ceiling, and a large lake with a pirate ship, to name just a few places. I think it will be a benefit to all of our operations, especially when we need quick answers.” Following guidance from COPTRZ, inspectors from Nexus Rail used the Elios 3 to 3D map a dangerous, inaccessible area beneath the Newcastle Metro Station.