A major pharmaceutical company used the Elios 2 for the tank inspections that are an important part of a Riboflavin test—here are the results.

Large scale tanks are used for manufacturing pharmaceutical products. These tanks are made out of stainless steel, since it is the best material for cleaning, and they must be kept clean at all times.

After each production run the tanks are cleaned with acid and lye. But when a plant receives a new tank, or when a new cleaning process is implemented for a tank, health and safety personnel must follow a strict protocol to verify that the tank is completely clean from all foreign contaminants and that future cleanings will be successful.

The protocol requires personnel to spray a fluorescent substance called Riboflavin inside the tank using a long rod, thoroughly coating the sides of the vessel. 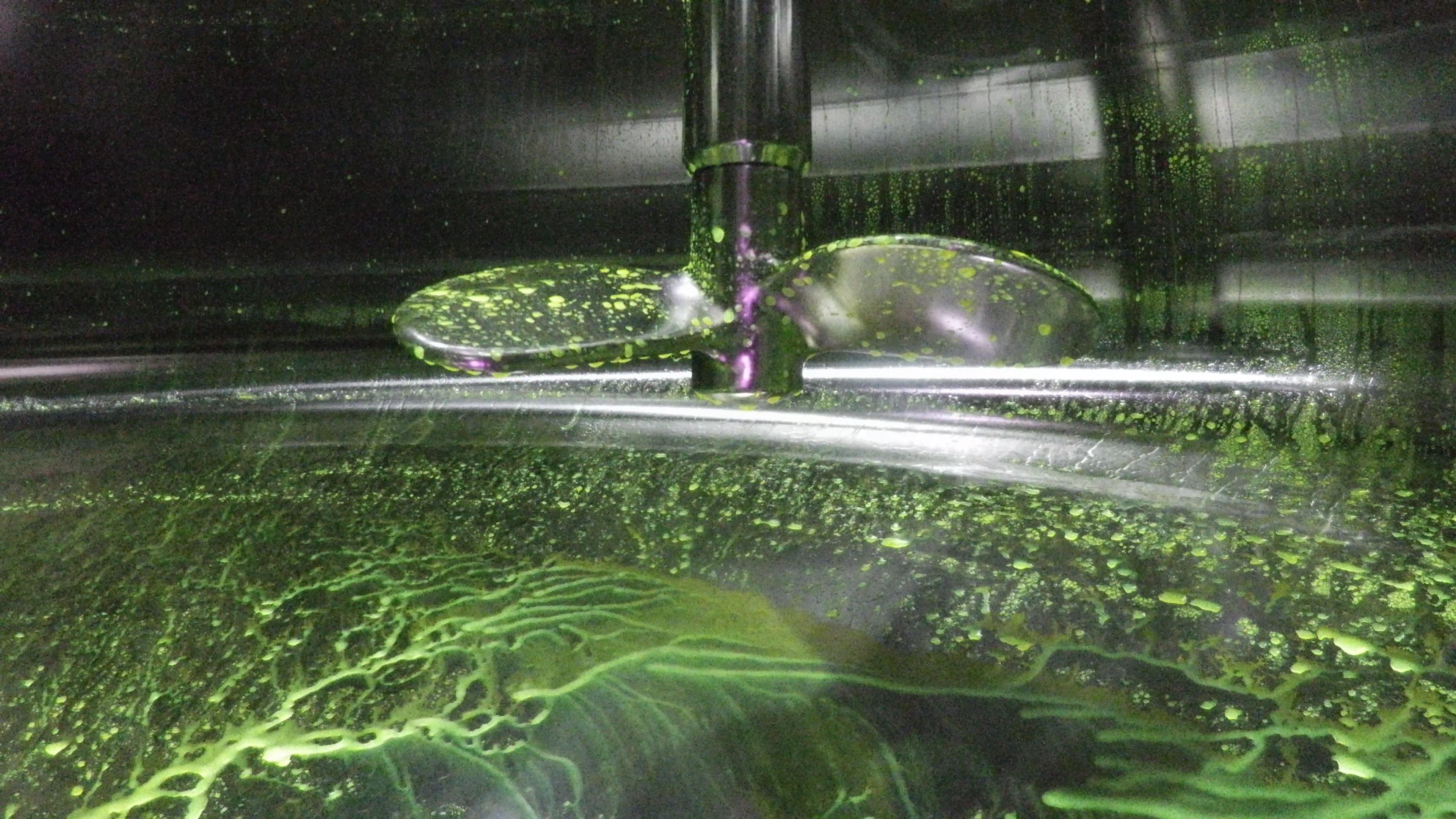 Riboflavin on the inside of a tank

The Riboflavin sticks to the surfaces inside the tank. After the tank is thoroughly coated, the Riboflavin is then cleaned off in order to show whether the cleaning processes being used are working correctly, and that the CIP (clean in places) protocol will deliver acceptable results in routine operation.

The reason for following this protocol is to test the efficiency of the cleaning process being used in the tanks. Riboflavin essentially acts as a stand-in for potential contaminants, helping personnel to easily see whether their cleaning processes are actually working.

In general, the protocol requires cleaning personnel to enter the tank twice:

When entering the tank, health and safety workers use UV lights to illuminate the Riboflavin, first to verify full coverage and then to verify that none of the substance is left within the vessel. The entire process is commonly called a Spray Shadow test or a Riboflavin test.

After the test is complete, the company can move forward with using the tank for manufacturing with the confidence that future cleaning steps are working correctly and all parts of the tank can be cleaned.

A production tank at the manufacturing site

The company wanted to explore how new technologies could help make its Riboflavin tests quicker, in order to reduce downtimes and increase savings.

It also wanted to see if it was possible to conduct the two verifications required in the cleaning tests—first ensuring full coverage of the Riboflavin, and then ensuring that no more Riboflavin was present after cleaning—remotely, so that workers wouldn’t be required to enter the tanks.

Markus Rockenschaub of AEROVISION Drone Support GmbH, a drone inspection services company based in Austria, proposed testing Flyability’s Elios 2 for the plant’s next round of Riboflavin testing.

Since the Elios 2 was designed to fly in confined spaces in order to collect high quality visual data, it seemed like the perfect tool for entering the tanks for these tests.

Rockenschaub was able to collect all the visual data needed for the two steps of the plant’s Riboflavin tests with the Elios 2, conducting tests on five tanks in one day. 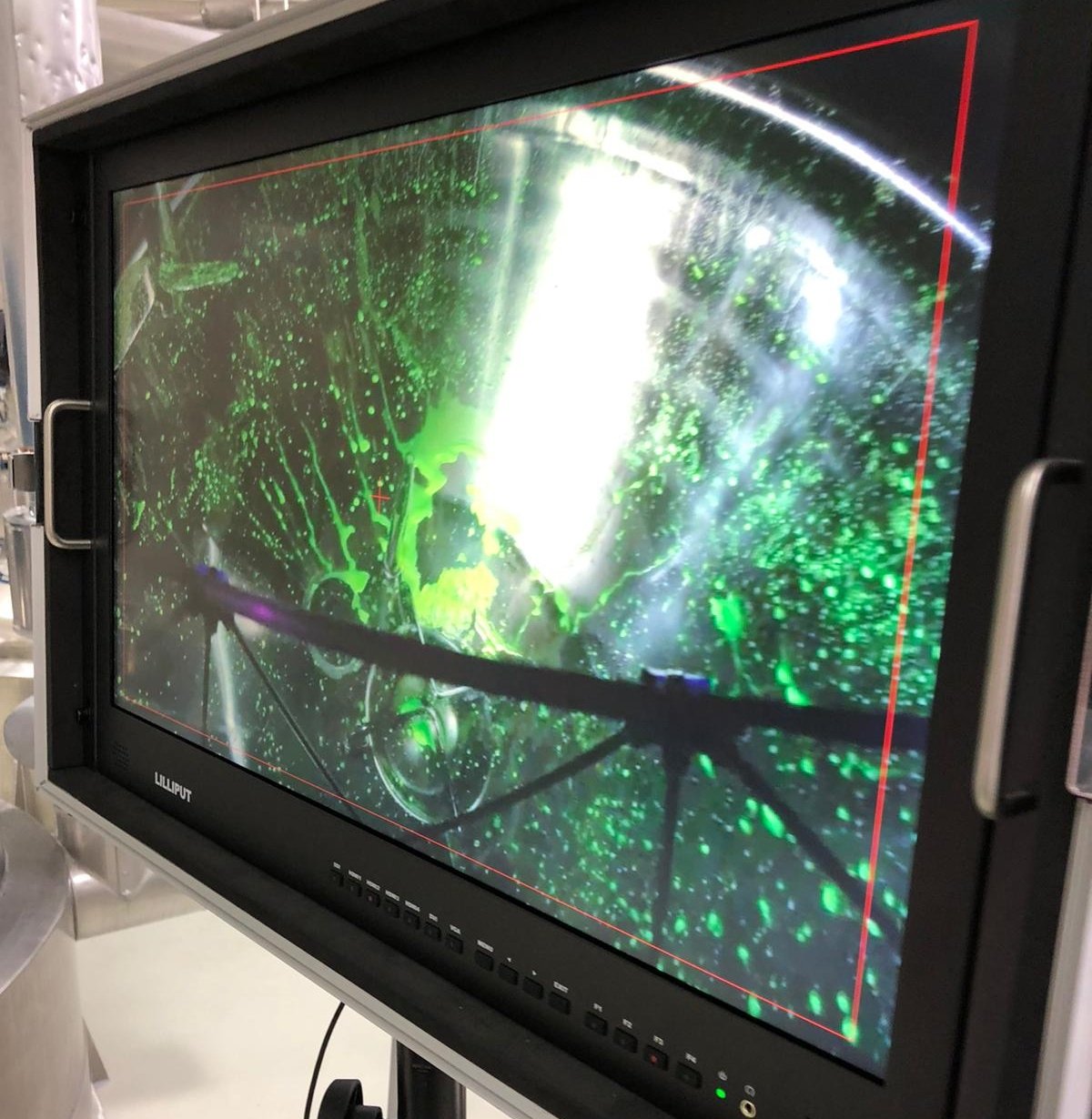 The Elios 2’s live-streamed data from inside a tank

Here are the benefits the pharmaceutical company realized from AEROVISION Drone Support GmbH’s tests with the Elios 2:

In some instances, the drone did find that not all of the Riboflavin had been fully removed, which meant that a second round of cleaning and tests needed to be done.

These findings are fairly common. But when the testing is done manually, they can lead to prolonged downtimes, since a person has to physically enter the tank each time in order to see whether any Riboflavin remains.

An image from the Elios 2 showing trace residue of Riboflavin

Given the success of AEROVISION Drone Support GmbH’s test of the Elios 2, the pharmaceutical company is interested in using the drone more often for the tank inspections it performs as part of its Riboflavin testing.

More tanks are being installed at the plant within the next six months, all of which will require Riboflavin tests, and the company would like to use the Elios 2 for the spray shadow tests it will need to conduct in the future.

The company is also interested in seeing whether UV lights can be attached to the Elios 2, which would enable better visualization of the fluorescent Riboflavin.