Manned entry can help inspectors collect detailed data on the condition of the asset but presents safety concerns. It is also impossible in certain scenarios, due either to access issues or to the inability to get temporary bypass of flows.

CCTV on a raft or sled is one of the most common methods sewer inspectors use to collect visual data remotely. But once the camera is in the water there is no way to control where it’s pointed or how fast it moves through the system, and this lack of control leads to unreliable data capture.

Robotic solutions with multi-sensor platforms (CCTV, SONAR, laser profiling, or LiDAR) can yield a huge amount of data, but are often very expensive. And their size can present significant issues with access—most robots used in sewer inspections are so big they need to be lowered into the sewer system with a small crane. 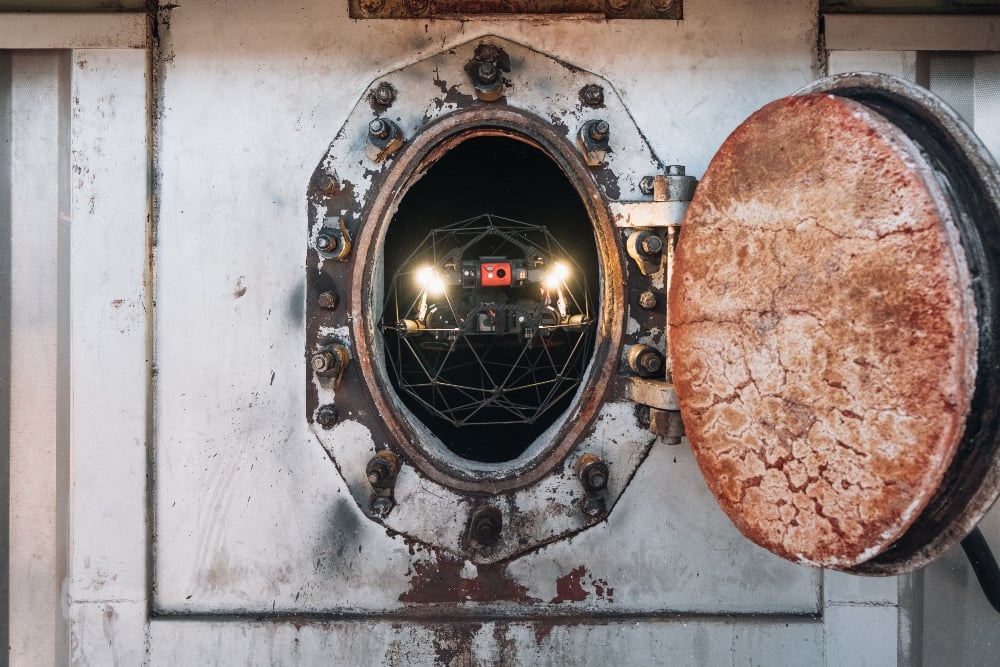 Indoor drones like the Elios 2 (pictured above) present a fourth solution.

Small, stable, and easy to control even in high flow conditions, a drone like the Elios 2 can enter a sewer system and collect high quality visual data without any advance preparation, and at a relatively low cost.

Here are eight ways that indoor drones are changing sewer inspections for the better. 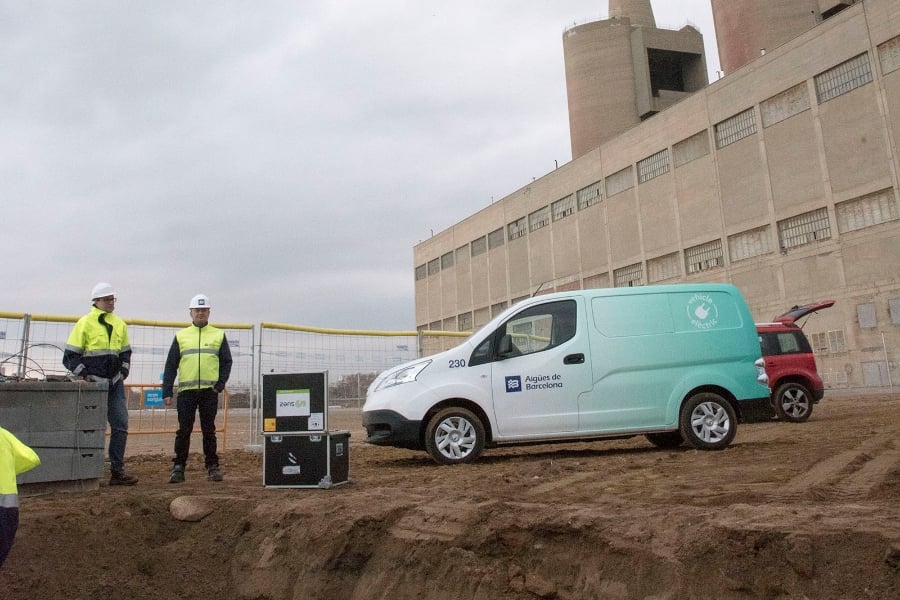 Péter Kövessi, former Director of Client Services at Flind—a company that helps oversee the massive sewer infrastructure in the city of Barcelona—estimates that sewer inspections conducted by drone are twice as efficient as human inspections and 40% less expensive per meter of inspection.

Drones also have the potential to eliminate the need for using expensive robotics solutions like those described above, which can help inspectors realize even more savings.

The type of confined space entry required for sewer inspections always presents a certain level of risk to inspectors.

In addition, sewers present specific safety hazards to inspectors in the form of rushing water and the potential presence of noxious gases, such as Hydrogen Sulfide (H2S). In some cases, sewer inspectors must use scuba gear outfitted with PPE to protect them from the presence of raw sewage in order to conduct their inspections.

Using an indoor drone to collect visual data can reduce or even eliminate the need for inspectors to enter a sewer system, vastly improving safety for the inspection process.

Another drawback to using CCTV or robotics solutions for collecting data within sewer systems is that it can be hard to pinpoint the exact location of a defect identified by these methods—inspectors may see something that needs to be fixed, but they can’t always tell where it is in the asset.

But identifying a defect is only half the job of an inspection.

Inspectors also need to be able to tell their clients where defects are located in a way that can be shared with others, so that the defect can be evaluated and maintenance can be performed quickly and efficiently. 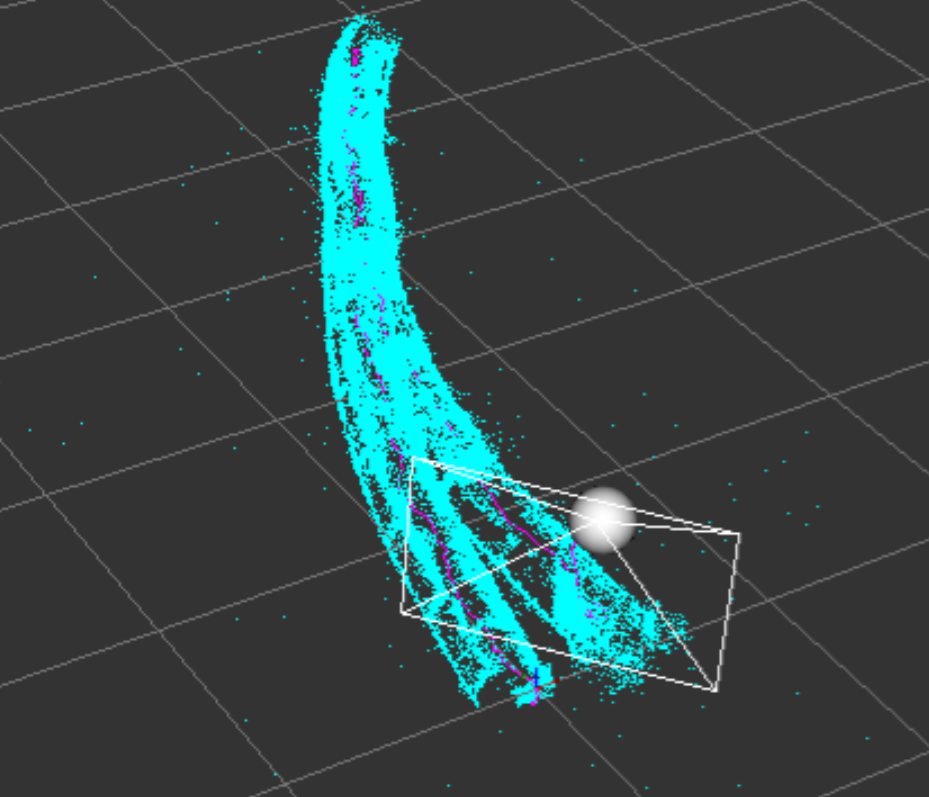 A point cloud of a sewer pipe created using Inspector 3.0

This data comes in the form of sparse point clouds that provide accurate, detailed data about the locations of defects found during a mission. These point clouds have precise data, allowing inspectors to measure the size of the defects and pinpoint where further investigation or attention is required.

Inspectors working in sewer systems have reported using the Elios 2 to capture “crystal clear” media of a quality they’ve never been able to achieve before. 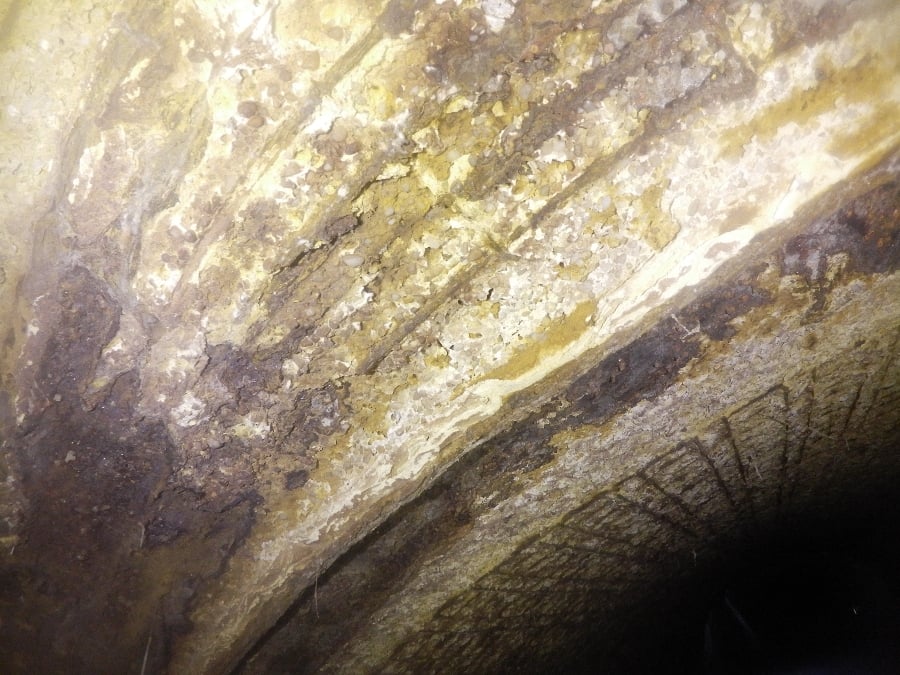 An image captured by the Elios 2 during a sewer inspection

A few other elements that contribute to the high quality of the drone’s images and videos are:

Manned entry is just not feasible in some sewer inspection scenarios due to access requirements or to the need to temporarily bypass flows, which could be cost prohibitive or simply impossible (as in large diameter or trunk sewers).

But the Elios 2 can access sections of sewer systems through manholes and other small entry points, allowing inspectors to collect stable, high quality visual data regardless of access issues. 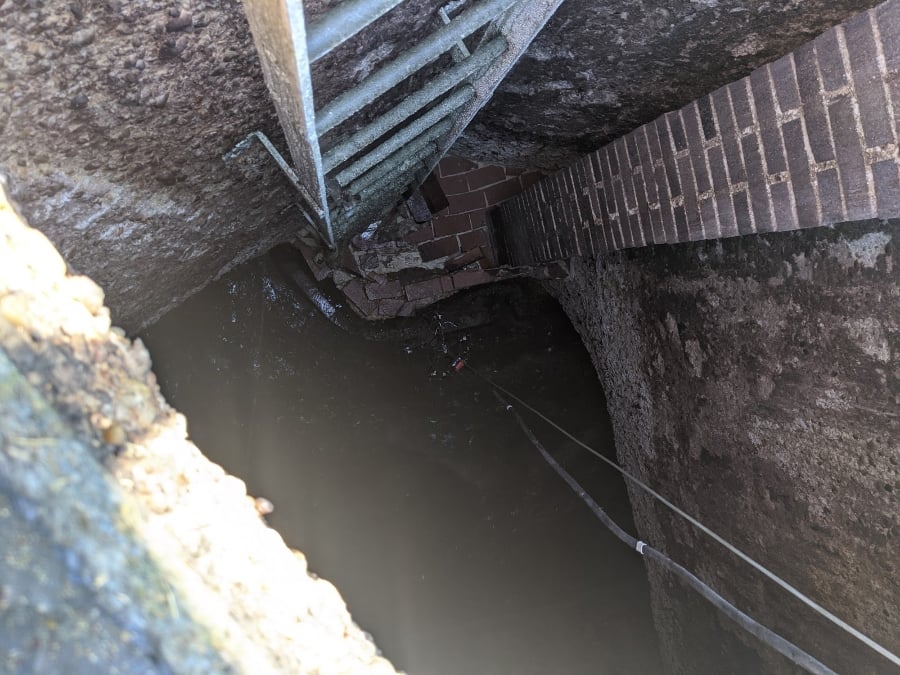 Inspectors lower the Elios 2 into a sewer system

The RVI techniques we mentioned above, like floating a CCTV or other type of camera from one manhole to another, can present range limitations, which can limit their usefulness in certain inspection scenarios.

Flyability’s Range Extender allows its indoor drones to fly farther from the pilot in order to perform inspections with greater efficiency.

The range extender in action

Drones like the Elios 2 are small and easy to deploy for sewer inspections, but they’re also very stable in flight.

The Elios 2 has been used in a system where the water was roaring through at an average velocity of 26 feet per second—a speed so fast that the power of the water generated airflow in the space between the water and the pipe that created turbulence for flying.

Despite the high rate of flow the Elios 2 remained stable in flight, capturing images and video for inspectors that were so clear they were able to completely eliminate the need for an inspector to enter the sewer system. 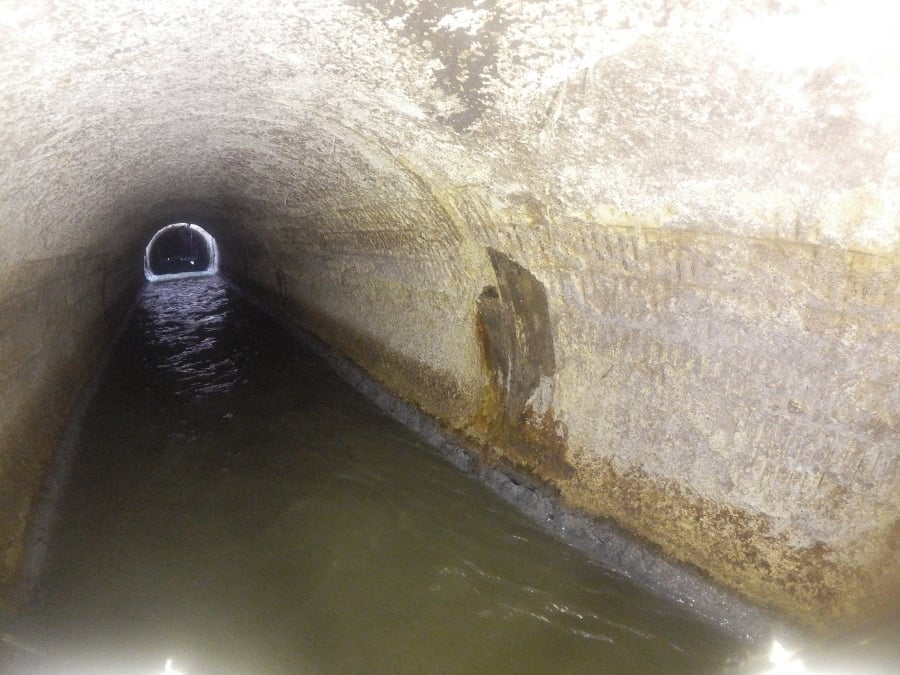 Drones can help significantly reduce the amount of time it takes to identify the cause of a problem during a sewer emergency.

For example, in Barcelona inspectors were faced with an urgent problem when a wastewater interceptor that served five different municipalities broke suddenly during a severe storm. 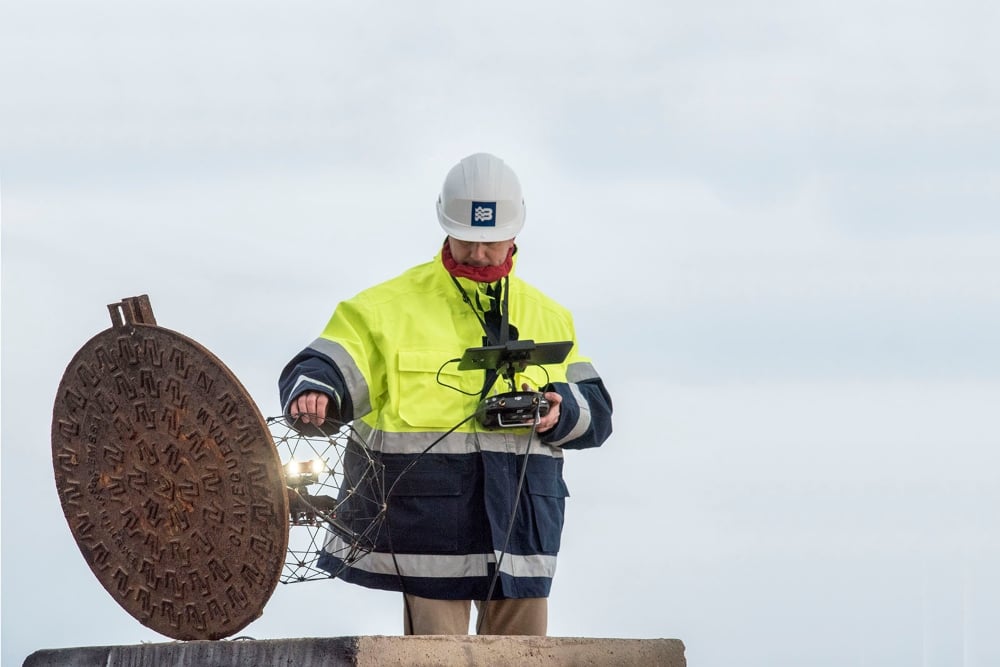 An inspector in Barcelona placing a drone into a manhole

Every moment counted in this emergency, since the damaged pipe was leaking raw sewage into the sea at a rate of 500 cubic meters per second.

Although the broken pipe was ten feet in diameter, there was no way for inspectors to enter it because sewage was pouring out at such a rapid rate.

Inspectors were able to fly the Elios into the pipe through intact manholes, both upstream and downstream of the visible break, and quickly survey the entire area to identify the exact location of the break and extent of the damage.

Using this information, experts on the scene were able to ensure that the bypass was connected at the correct place to quickly stop the flow of waste into the sea and to avoid the risk of a future break.

Read the full case study to learn more about how the Elios was used to help inspectors speed up their response to an emergency in Barcelona’s sewer system.