U.K.-based inspection company TEXO has been conducting inspections on FPSOs for several years.

FPSO stands for Floating Production Storage and Offloading, and refers to a floating vessel that processes and stores oil until it can be transferred to a tanker for additional refining or transportation. 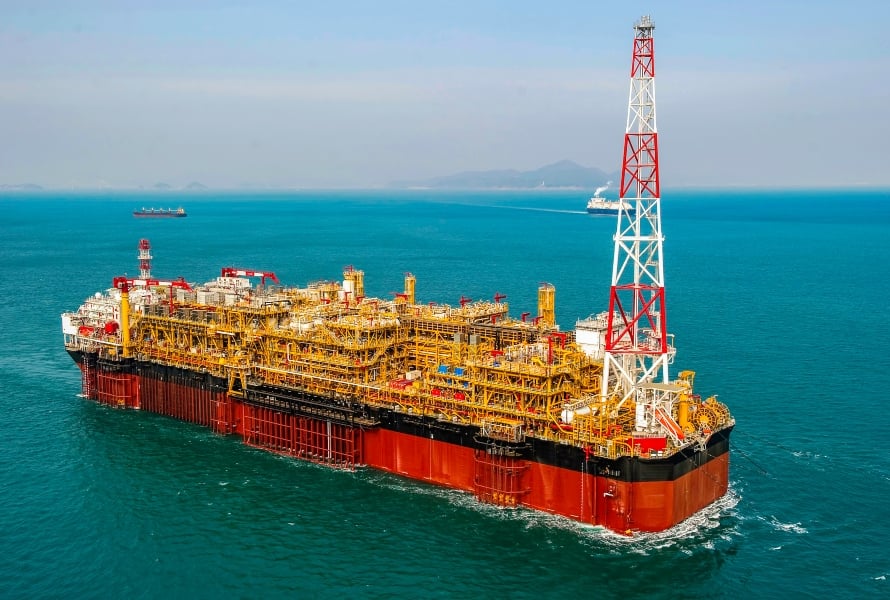 In the U.K., as in most of the world, the cargo tanks that hold oil on an FPSO must be inspected at least once every five years. These inspections are made to ensure the tanks stay in good working order, and are not at risk of leaks or other issues that might result in environmental damage, or accidents that could hurt those working onboard.

A typical cargo tank inspection on an FPSO takes about two weeks, and often requires the use of scaffolding or rope access to allow inspectors to work at height. These tanks are vast indoor structures that can reach up to almost 40 meters in height, which makes it time-consuming for inspectors to conduct manual inspections throughout their entirety.

The lost oil production caused by the two week downtime presents a significant loss of revenue for the oil company, as does the cost for building scaffolding—not to mention the risk that working at height and in confined spaces presents to the personnel in charge of performing the actual inspection.

To improve the process, inspectors at TEXO wanted to see if there was a way to conduct a cargo tank inspection remotely with Flyability’s Elios 2 indoor drone. Texo personnel were already using the Elios for other confined space inspections, and they thought it might be the perfect tool for conducting visual inspections remotely inside FPSO cargo tanks.

TEXO had a cargo tank inspection coming up on an FPSO located in the North Sea, and decided to develop a new method for using the Elios 2 for the inspection. 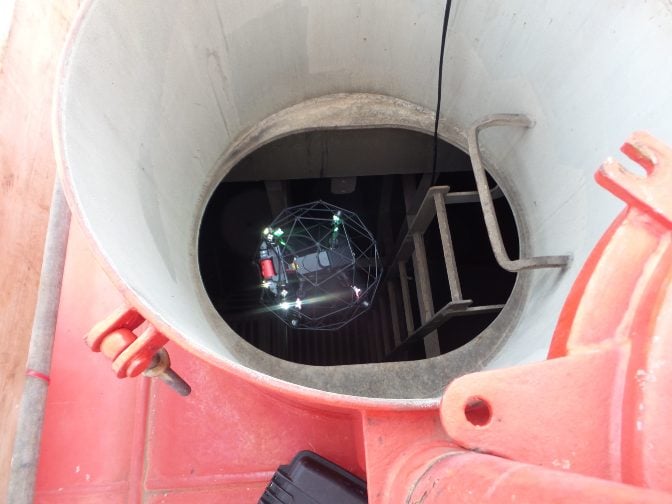 To create the safest, most organized approach for the inspection TEXO partnered with the DNV, one of the biggest classification societies in the world and a recognized advisor for the maritime industry.

Working with DNV and the FPSO operator, TEXO led the creation of a methodical process for using the Elios 2 to inspect an FPSO cargo tank.

ATEX considerations were an important part of the planning process, given the potentially explosive environment in which the inspection would take place.

To address ATEX issues, TEXO worked with the vessel owners to undertake extensive hazard identification and comprehensive risk assessments, ensuring that all operations could be safely undertaken.

First, all isolations were managed as per the operator’s standard procedures in order to eliminate any sudden combustible medium entering the tank during the survey.

After doing this, cleaning of the tanks was undertaken by various processes to ensure that no manned entry was required. From here the tank underwent active venting, then all operations were conducted with gas monitoring prior to every launch. All of this was conducted under a Cat 2 Hot Works permit, with the appropriate risk assessment taken according to the requirements of the permit.

The cargo tank inspection that TEXO performed on the FPSO was a success.

“We were able to demonstrate to the client and the Class Society that we have a reliable and consistent product which could stand up to close scrutiny.”

Both a drone pilot and an inspector from TEXO were present for the inspection, as well as a surveyor from DNV. 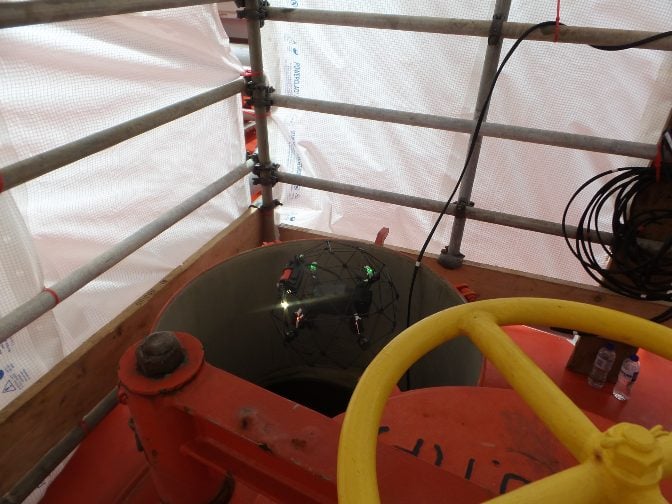 While the pilot flew the Elios 2 inside the cargo tank, the inspector and DNV surveyor observed the drone’s live video stream, looking for signs of defects. After the visual data was collected, the surveyor and inspector performed a more detailed visual inspection by looking closely at the drone’s video footage.

Inspections inside tanks can be challenging because they present large, uniform environments, which can make it difficult for inspectors to be certain that they’re getting full coverage.

Using a methodical approach that TEXO developed in partnership with DNV, inspectors were able to collect visual data systematically throughout the whole tank and complete the inspection in a fraction of the time it would have taken a team of rope-access specialists to complete it.

The inspection uncovered a list of defects that needed maintenance, including broken heating coils and damaged welds.

These defects required manned entry to be addressed, with the repair team using both scaffolding and rope access to reach the areas that needed work.

Despite the need for people to enter the tank for the repair part of the maintenance process, using the Elios 2 for remote visual data collection significantly reduced human exposure to the potential harms of working in confined spaces. Further, the drone’s visual data provided the maintenance team with actionable intelligence that led to an easier identification of these defects, meaning less time spent finding the areas that needed to be repaired.

Here are some of the images captured by the Elios 2 during the inspection: 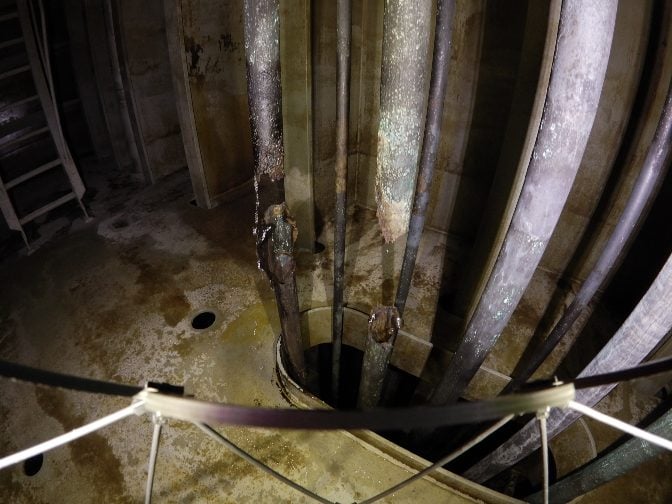 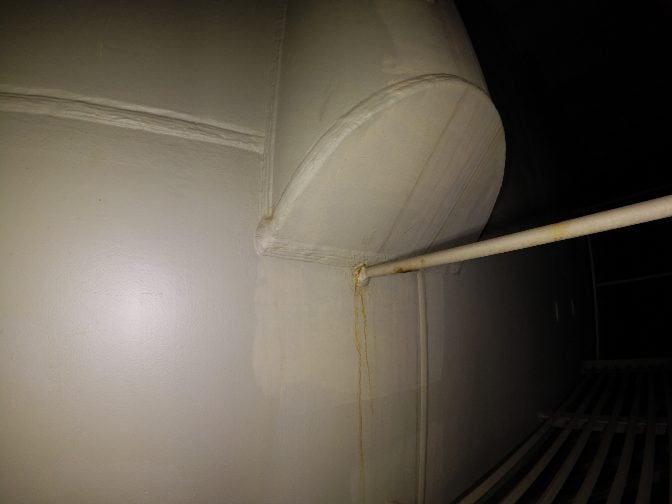 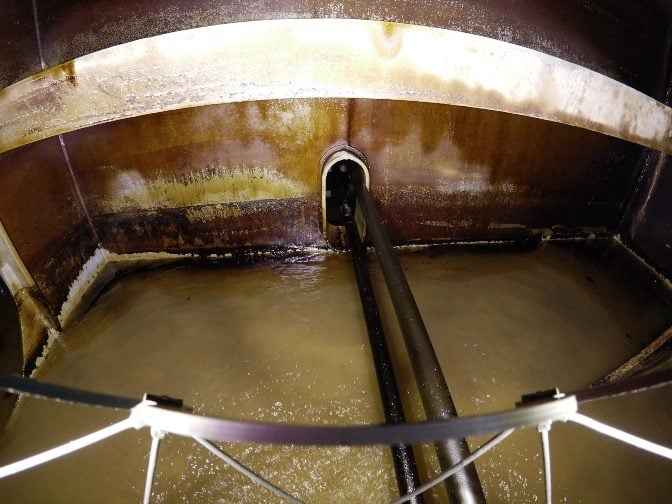 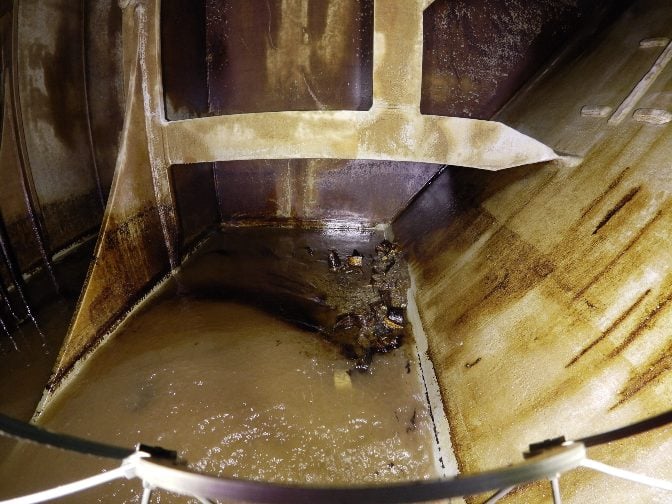 To create an approach for the cargo tank inspection, TEXO personnel spent hundreds of hours over six weeks to validate the Elios 2, focusing on:

As a result of this meticulous work, TEXO and DNV produced an accredited method for how to do FPSO cargo tank inspections by drone.

Benefits of Using the Elios 2

Here are all the benefits TEXO helped its client realize by using the Elios 2 to perform this inspection:

In fact, TEXO has been hired to inspect further  cargo tanks on the vessel, and plans to complete these inspections eventually using the new method it helped develop, collecting visual data remotely with the Elios 2.

TEXO also plans to expand the use of this approach to cargo tank inspections on other FPSOs in the near future, and to explore other Maritime and Oil & Gas applications that could benefit from the method it developed with DNV.