A severe fire broke out at the Liverpool Echo Arena Multi Story Car Park on 31st December 2017. Once the fire was under control and extinguished, public safety was of the highest concern. Mandated by Liverpool City Council, PCF Survey deployed Elios to safely investigate the aftermath.

The source of the fire was given by an eye witness, who described a car parked on the 3rd floor on fire. This is a modern 7 Storey structure built in 2006. The approximate size is 70m by 60m and the frame is made of substantial reinforced concrete. At the time an estimated 1400 cars were inside the structure, the majority were destroyed. The circumstances of this incident are unique. The fire spread remarkably quickly and transformed this into a petrochemical fire, given to the fuel within the fuel tanks of the vehicles. The temperature of the fire was estimated to be over 1500°C - temperatures more than capable of spalling concrete and melting Aluminium. https://www.structural-safety.org/media/426735/scoss-alert-fire-in-multi-storey-car-parks.pdf

A fire of this intensity drew significant concern over the integrity of the structure. Pedestrianised areas ran all around this structure. The Echo Arena Stadium lay approximately 20m away and an apartment block was detached from this structure by only 5m. Public safety was of the highest concern, the consequences of the structure failing were simply not an option to consider. Preliminary surveys conducted by Merseyside Fire and Rescue, Liverpool City Council and the Structural Safety Organisation were carried out at the earliest opportunity.

Unfortunately these surveys were limited due to the devastation caused by the fire. Although the reinforced frame appeared to be intact and maintained structural integrity, access to the floors was impossible. As seen in figure #1 The floors were simply too dangerous to enter, they had suffered significant damage and several collapses had taken place.

There are two linked-detached stair cores at either end of the structure which remained intact, apart from some structural cracking and movement. This was the limit of access on all floors. Electricity to the structure was now unavailable and lighting conditions were very dark. It seemed that there was no possible way to inspect the structure and form an evidential conclusion. The client needed to obtain data from hazardous areas, from a remote device that could operate without touching the floor.

Alastair Soane, of the Structural Safety Organisation queried the possibility of the use of UAVs to capture this required data. Having previously worked on a project with Andrew Sproson and Scott Dowell ( PCF Surveys ), Alastair sought their advice on UAV capabilities for such a task. PCF Surveys highly recommended the Elios Drone by Flyability.

PCF Surveys conducted a preliminary visual survey of the site and recognised several issues, which would render conventional UAVs unusable. These issues included lack of GPS signal, a lot of light and dry debris, hanging wires and other physical obstacles and very poor lighting. Another issue was maintaining visual line of sight of the device. The UK Civil Aviation Authority guidelines state that a UAV operator must maintain visual line of sight. Albeit the Elios is successful in many areas, the Elios had never been operated in such an environment. PCF Surveys felt a joint mission with Flyabilty would offer the best possible outcome and provide many learning opportunities for the future.

The mission and result

Detailed plans of the site were obtained, with key aims discussed. The location of seat of the fire was only approximate and needed to be identified. This was a key target for the mission. It was decided that the columns and beams closest to the seat of the fire may have been subjected to the highest temperatures and they were also a key target. Given that the fire had spread in an unusual manner, both upwards and downwards, the drainage channels which had Aluminium guttering were also a key target. 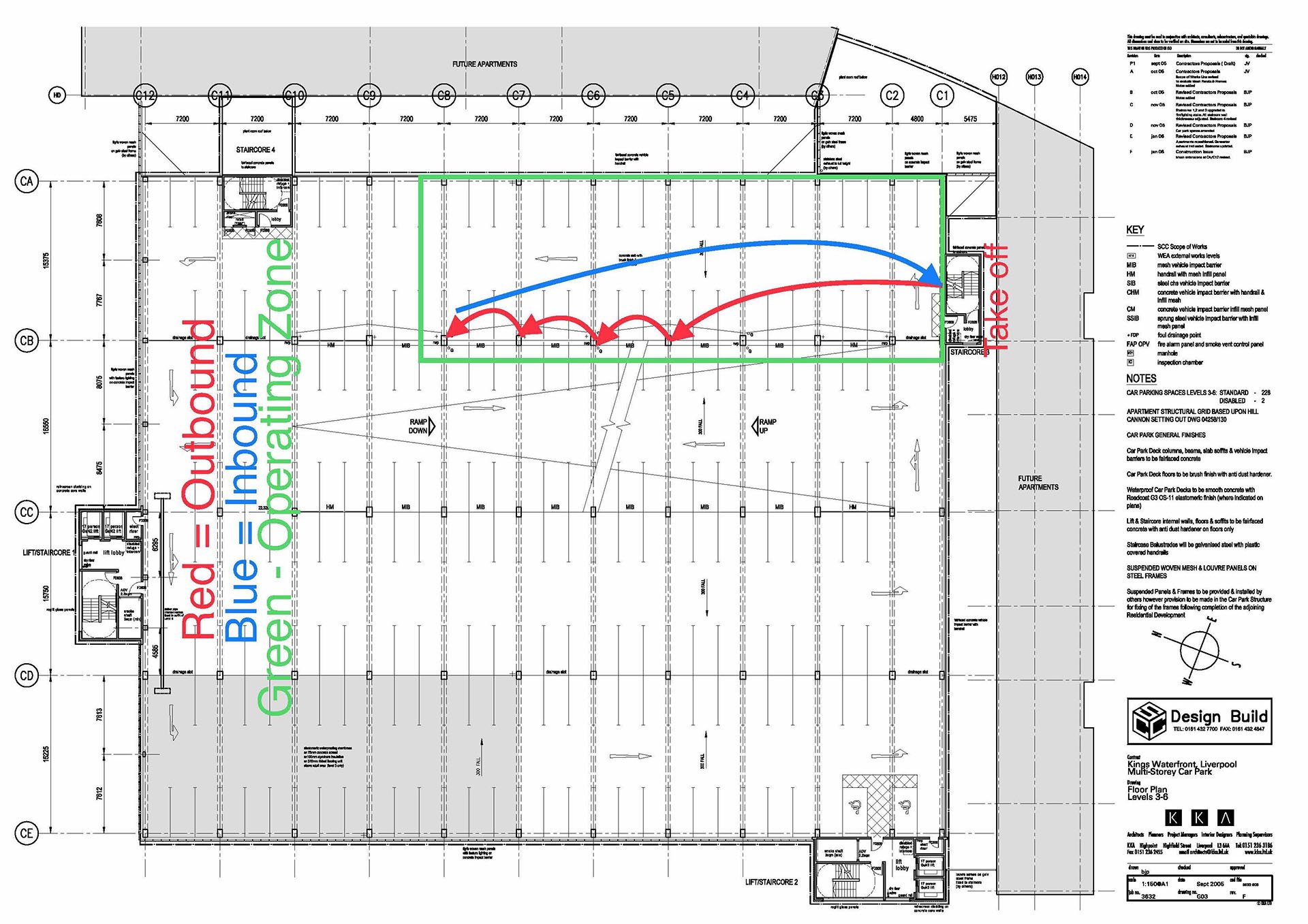 The Elios was operated from the areas which had been designated safe to enter. The stair cores at the North and South sides of the structure were the main areas identified. There were areas where small parts of the floor, near to the stair core, were safe to enter. This allowed PCF Surveys to have multiple observation points and maintain a visual line of sight.

PCF Surveys conducted an inspection of suspected seat of the fire first. Due to the Elios unique cage it had the ability to land within the engine bay of the vehicle in question. Furthermore the on-board lighting and 360 Degree camera rotation allowed PCF Surveys to obtain a full view of this area, something which previously was impossible to do. PCF Surveys also landed in the boot space of the vehicle and allowed further detailed inspections to take place. 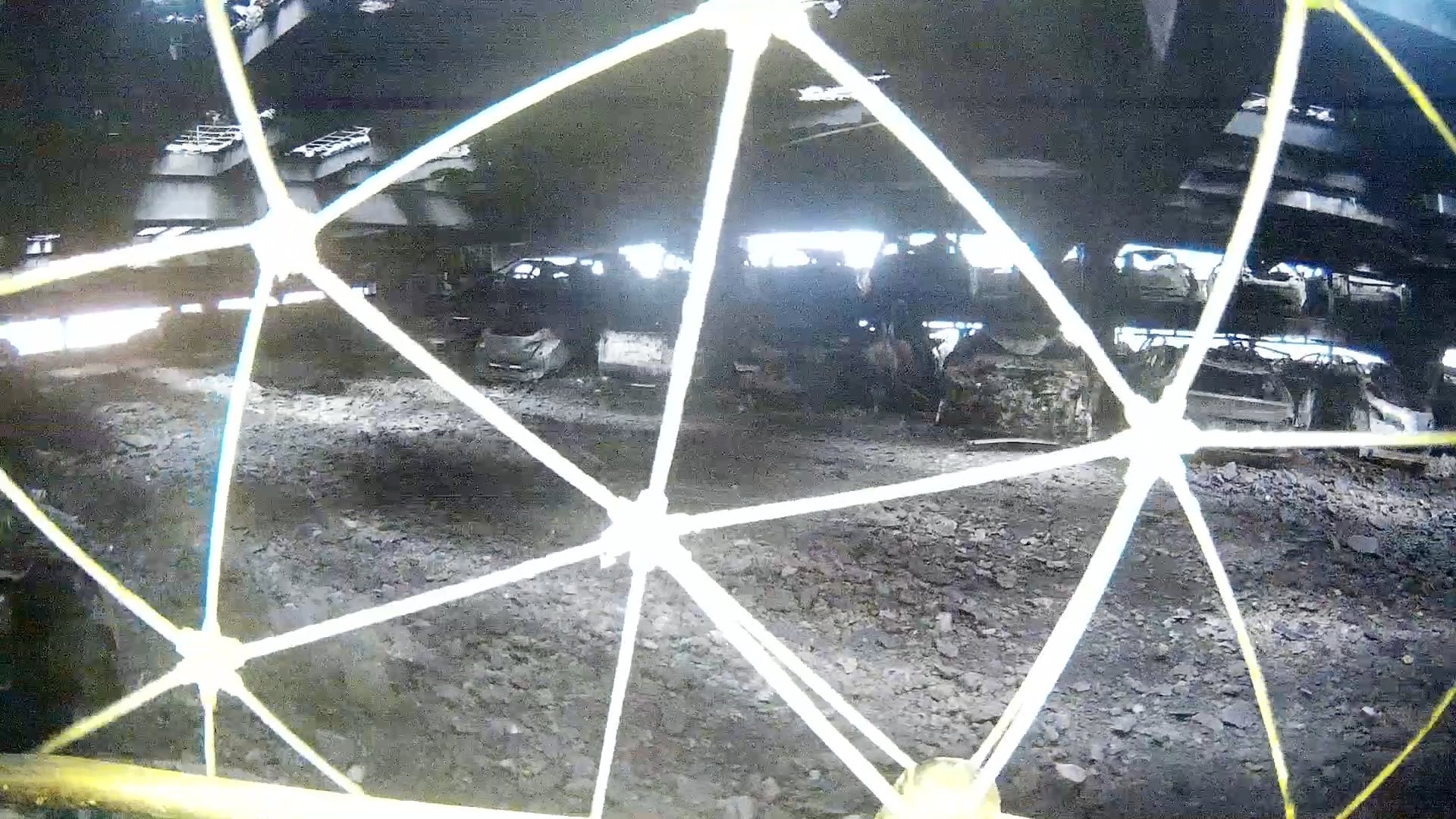 PCF Surveys then conducted a systematic approach to the columns and beams.  The multi gimbal cage allowed PCF Surveys to push up against these parts of the structure, allowing a close up view of the damage. Measurements were drawn from this footage by obtaining the size of the cage’s cross sections and the distance of them from the camera. The software within the controller allows the pilot to provide commentary. This was essential when reviewing the footage after the mission. It allowed a detailed report into the locations the Elios had inspected, which in turn allowed a forensic analysis of the data. 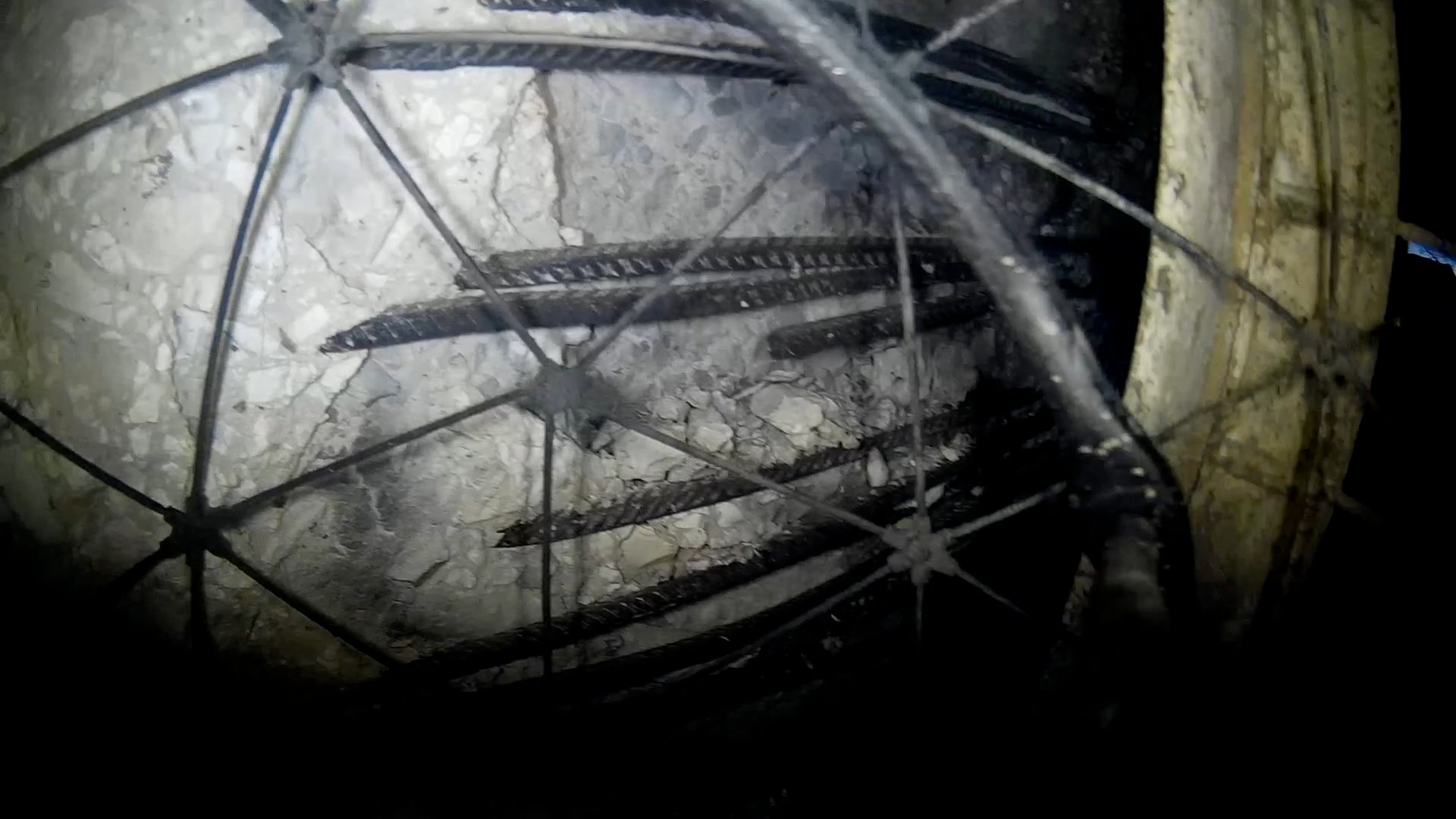 The last key target was the drainage channels. PCF Surveys interpreted the plans vs the physical structure. This skill is essential as the original plans do not always accurately relate to a structure once built. Late changes can slightly alter this. The channels were located and the Elios inspected these areas.  Again accurate flight plans and reports were produced from these flights.

Lastly, a general overview of the some of the floors was conducted. Albeit this offers no valuable data, with regards to structural integrity, it offers an insight into the severe damage and devastation caused throughout all parts of the structure.

An extremely hazardous and dangerous structure was successfully inspected using the Elios device. There was no risk to human life throughout the mission. The data obtained by PCF Surveys has contributed to a forensic report by Merseyside Fire and Rescue.  Without this data the report would be been limited to the physical limitations the structure imposed.

At this time the structure is to be demolished and re-built. 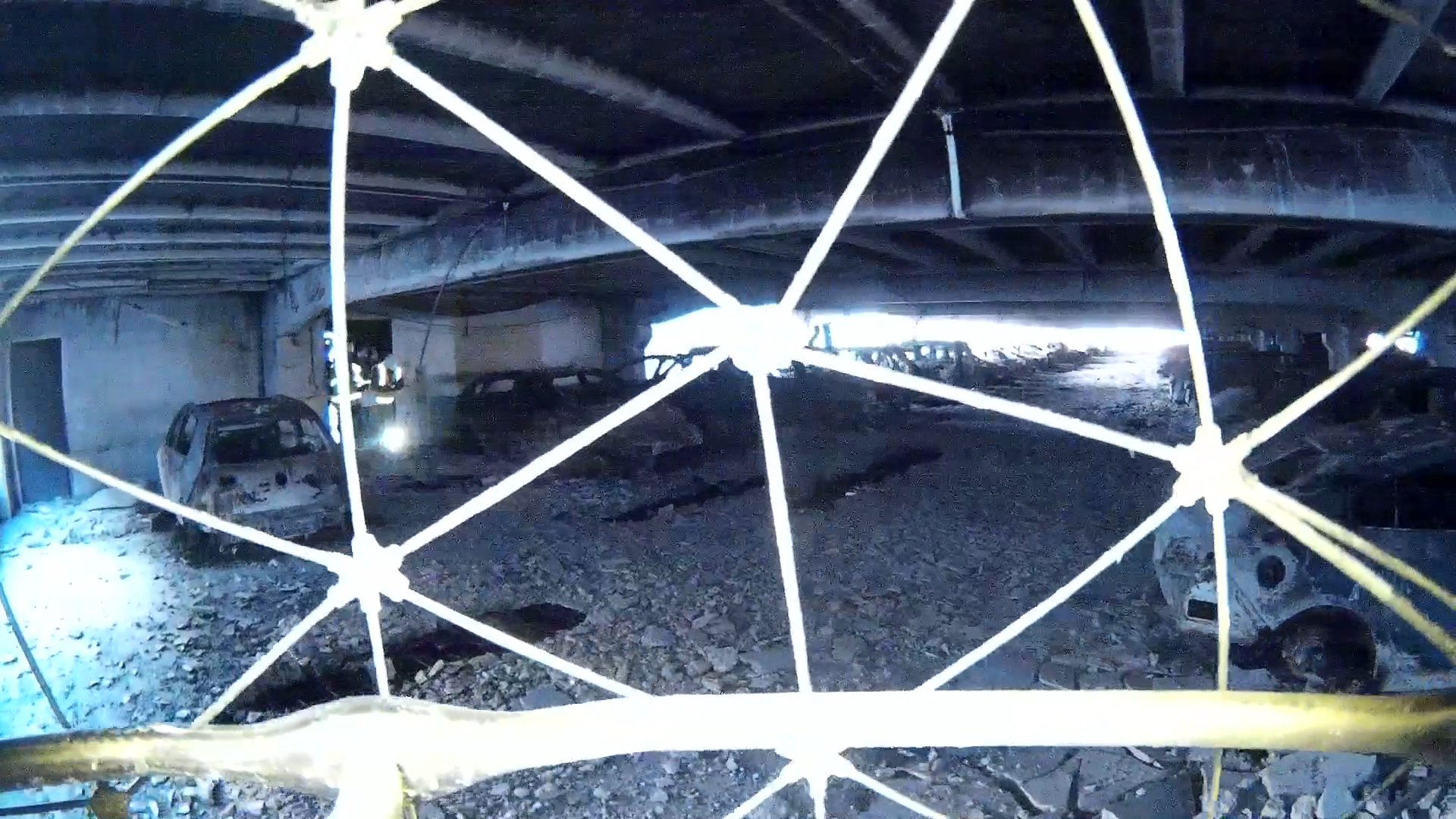 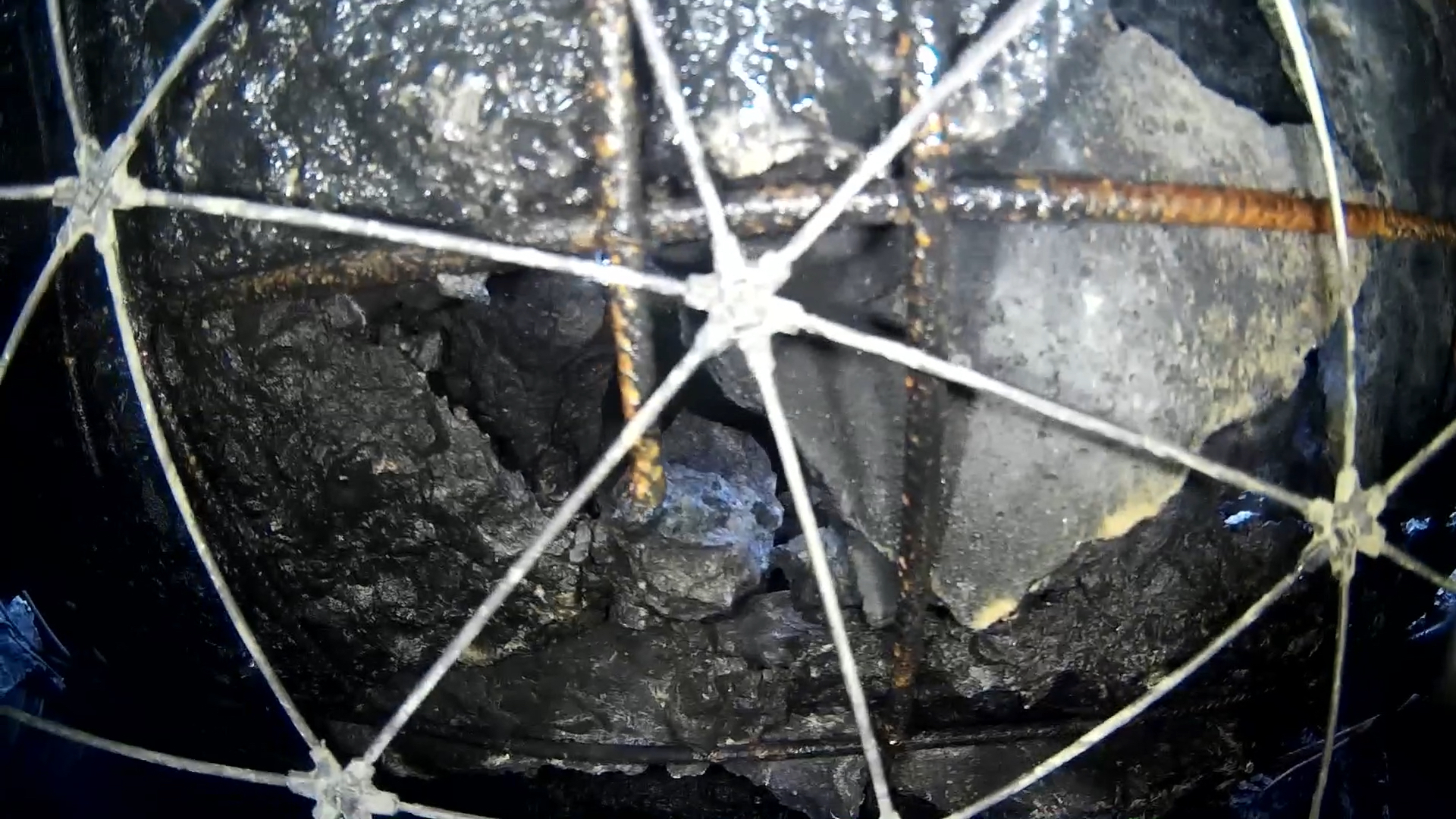 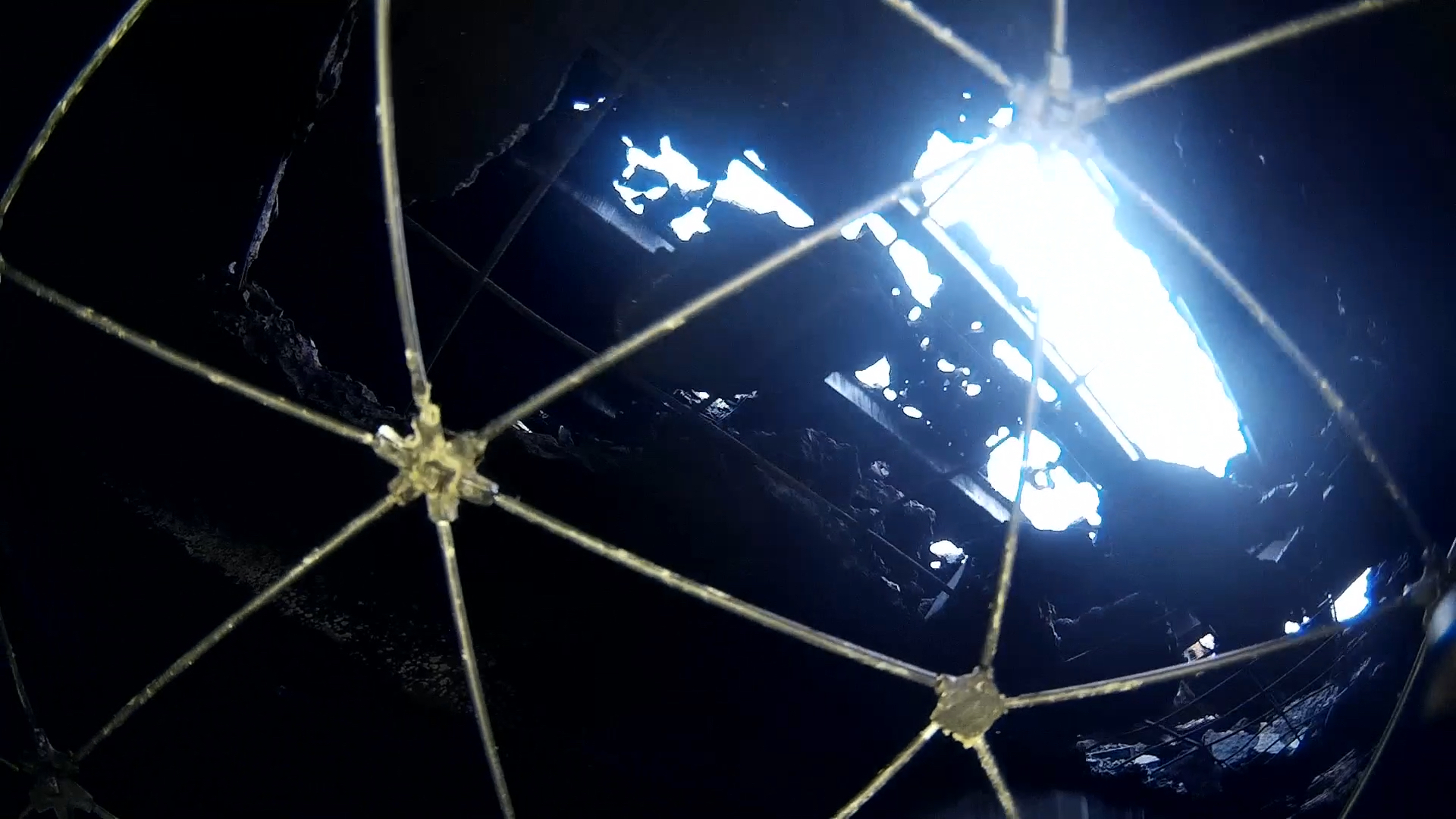 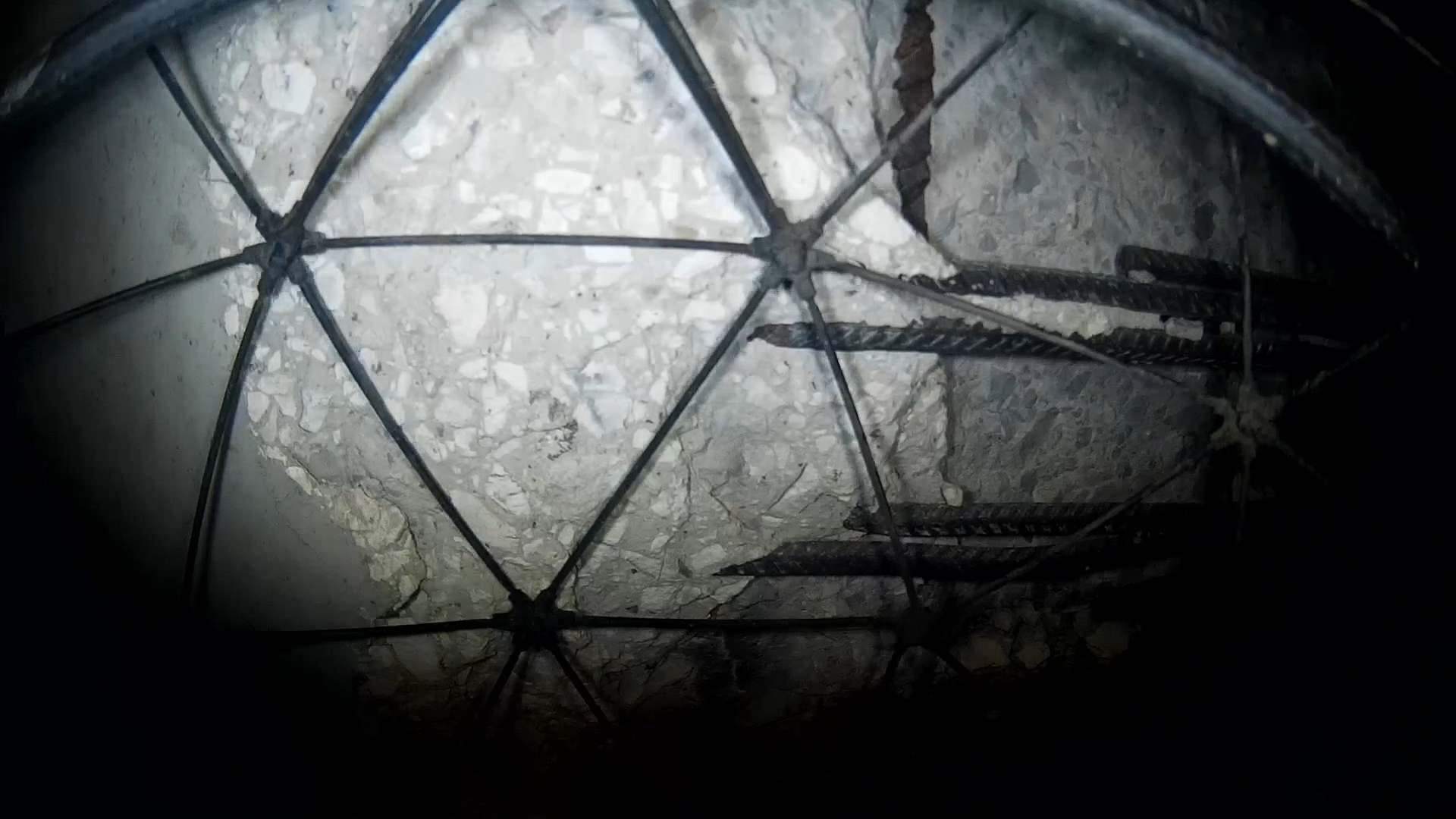 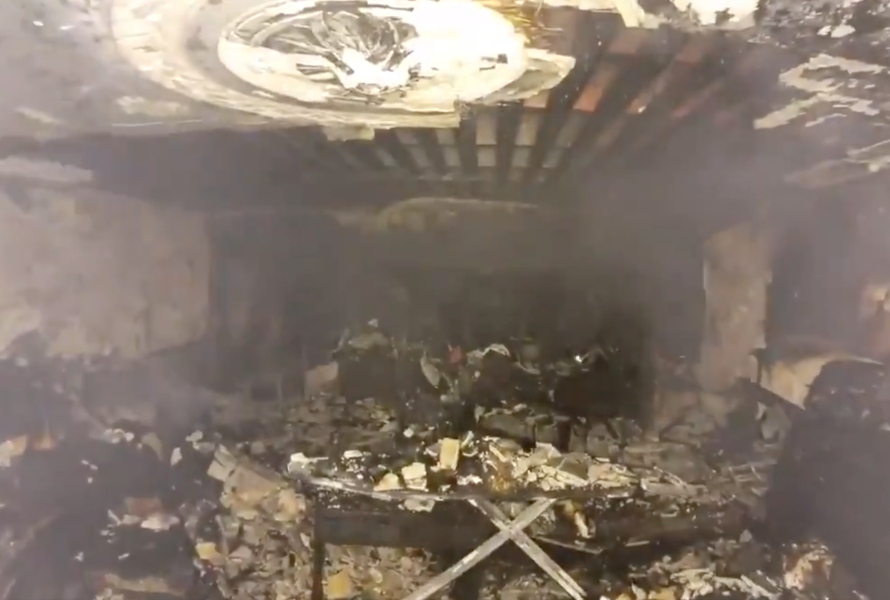