A study conducted by Boiler Room Consulting (BRC) found that Flyability’s collision-tolerant drones can help significantly reduce CO2 emissions from boilers. Read the article to find out how.

The results were significant.

BRC found that an increase in the frequency of boiler inspections, which was supported by Flyability drones, could potentially reduce CO2 emissions by as much as 649 metric tons a year.

Read on to learn how. 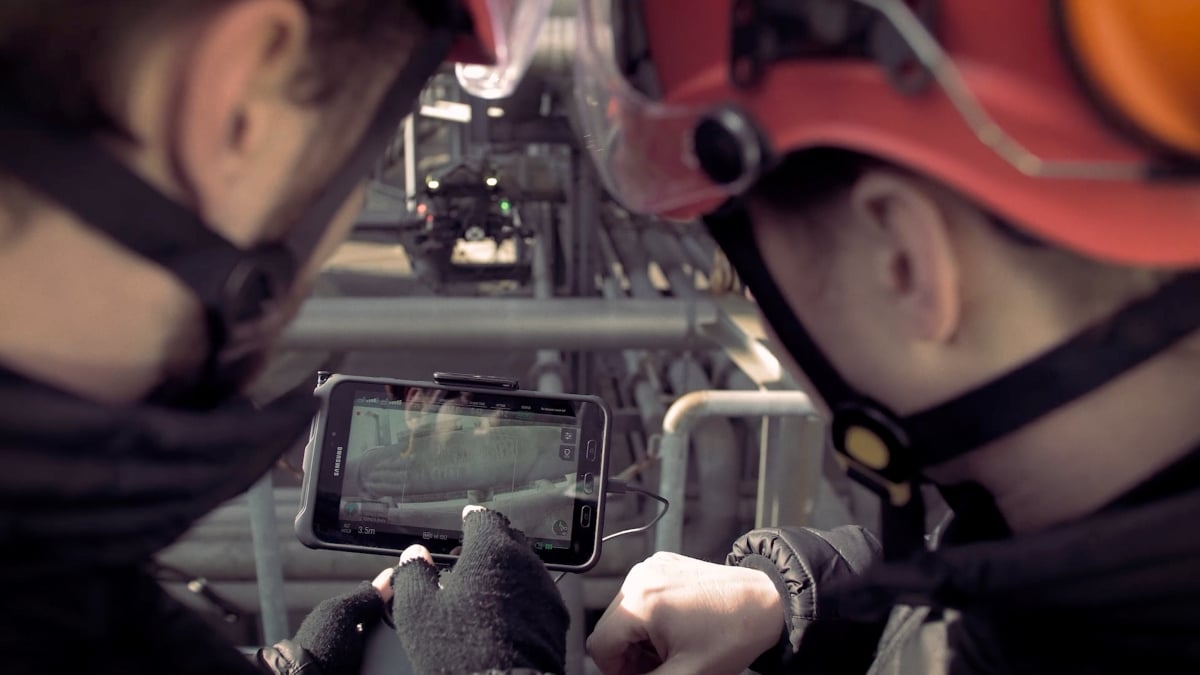 Most boiler inspections are conducted on an annual basis. This means that issues in a boiler may go undetected for a long time.

While these issues may not immediately impact the life of the boiler, they can still lead to leaks and other emissions that can have a negative impact on the environment.

By increasing inspections, companies can detect problems that are contributing to harmful emission leaks earlier and take steps to prevent them. Increasing the frequency of inspections can also help companies save money by improving maintenance on expensive assets, such as boilers and pressure vessels, which in turn can increase their longevity.

Because boiler inspections are expensive.

In a typical boiler inspection, inspectors must physically enter the boiler and conduct a methodical visual inspection, reviewing every part of the boiler with their eyes to collect visual data on its condition.

Many boilers are quite large, so companies have to build scaffolding for inspectors to stand on while conducting inspections. Scaffolding can be expensive to build and take down, often costing anywhere from thousands to tens of thousands of dollars for a single inspection.

The extra time required for building and taking down scaffolding also means extra downtime for the boiler, which represents additional lost profits for the company—sometimes as high as hundreds of thousands of dollars a day.

Due to the high costs of inspections, many companies usually decide not to inspect their boilers more than once a year, which is the common legal requirement for most countries.

How Can Flyability Drones Help Increase the Frequency of Inspections?

Using a drone instead of a person to collect visual data inside a boiler can significantly reduce the cost of the inspection, in some cases by as much as 90% or more. This cost reduction allows companies to increase the frequency of inspections.

Boilers present many challenges for flying, since the space within them is tight and full of objects for a drone’s blades to hit, which would immediately bring a normal drone crashing down. Also, in order to collect useful visual data, the drone must be stabilized while in flight and have a light source that can allow inspectors to understand the depth of different items on a wall or ceiling that’s being inspected, such as pitting, grooves, or welds.

Flyability drones are designed specifically for inspections inside confined spaces like boilers, and help address all of these challenges. Flyability’s Elios and Elios 2 both sit within a cage, which allows the drone to collide and continue flying, making them uniquely suited for boiler inspections.

Boiler Room Consulting wanted to test the theory that increased inspections can reduce the overall amount of CO2 a boiler emits.

To do this, they decided to focus on a boiler’s combustion head.

Combustion heads undergo severe stress during regular use, often experiencing temperature swings of hundreds of degrees Fahrenheit. This constant cooling and heating can lead to failures that start off small in magnitude but become worse and worse over time.

[RoNik Inspectioneering tested the Elios 2 15 different times in rigorous inspection scenarios—find out what they learned in this article.]

Theory to be tested

A damaged combustion head will cause a boiler to produce higher CO2 emissions.

Questions to be answered

The findings were significant.

Although the failed combustion head only produced a loss in overall efficiency for the boiler of between .35% and .41%, the corresponding amount of CO2 released by this loss of efficiency was between 442 and 649 metric tons a year.

The cause of increased CO2 emissions

A broken combustion head increases CO in a boiler’s flue gases, which reduces the efficiency of combustion.

The increased CO released into the boiler by the broken combustion head resulted in an increase in the amount of energy required from the boiler to continue its regular operations. This increase in energy represents a loss of efficiency—shown in the chart above as a loss of .35% to .41%—and results in a higher production of CO2.

BRC found that increased inspections supported by Flyability’s collision-tolerant drones can reduce CO2 emissions by 442 to 649 metric tons a year—a huge reduction, and that’s just from a single boiler.

It’s important to remember that BRC focused only on one potential type of damage.

A lot can go wrong in a year, especially within an asset subjected to such large changes in temperature, and other kinds of damage could also lead to a boiler emitting substances that are potentially harmful to the environment.

“The use of collision-tolerant drone technology facilitates the practicality of more frequent inspections through reducing complexity, potential safety concerns with personnel performing the inspections, and overall costs including operating costs.”

As BRC notes in its report, there are other incentives for a company to increase inspections.

In addition to reducing the emission of Greenhouse Gases and other harmful substances, using a drone instead of a person for inspections in confined spaces means keeping a person out of a potentially harmful scenario.

From a purely financial perspective, increasing the efficiency of a boiler will result in savings for the company running it by reducing overall operating costs and by potentially increasing the longevity of the boiler.