For indoor inspections, drones can help eliminate hazards completely by replacing the need for an inspector to enter them. This places drones in the top tier of hazard controls.

The hierarchy of control is a list of five controls that can be applied to industrial processes in order to address potential hazards to workers.

Each control in the list presents a general category of activities that a company can undertake to mitigate or even remove hazards from the workplace.

The list of the five controls is generally presented as an inverted triangle, with the least effective method for controlling hazards presented at the bottom, the next least immediately above that, and so on, like this: 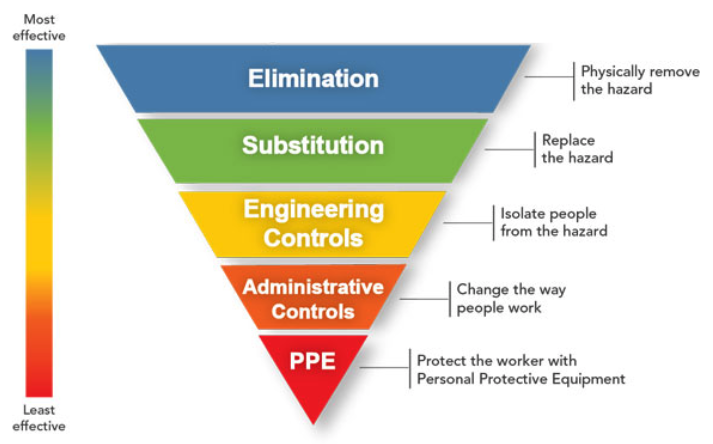 By removing hazards through intentional planning, the ultimate goal of using the hierarchy of hazard controls is to help workers avoid work-related illness, injuries, and accidents on site.

In a traditional indoor inspection of a boiler or pressure vessel, the only controls available to site administrators are generally the two lowest levels—PPE and Administrative Controls.

The reason for this is fairly simple.

The three higher tiers of the hierarchy of controls—Engineering Controls, Substitution, and Elimination—all require the hazard to be removed, replaced, or for the person to be isolated from it.

But for indoor inspections that are performed manually, none of these options are available because inspectors must physically enter the confined space in order to perform a visual inspection with their naked eye.

And this fact leaves only the first two levels of control available—unless you can use some kind of robotics solution, like a drone, to completely take the place of the inspector. (We'll cover drones in the next section, which deals with where drones fit into the hierarchy of hazard controls.) 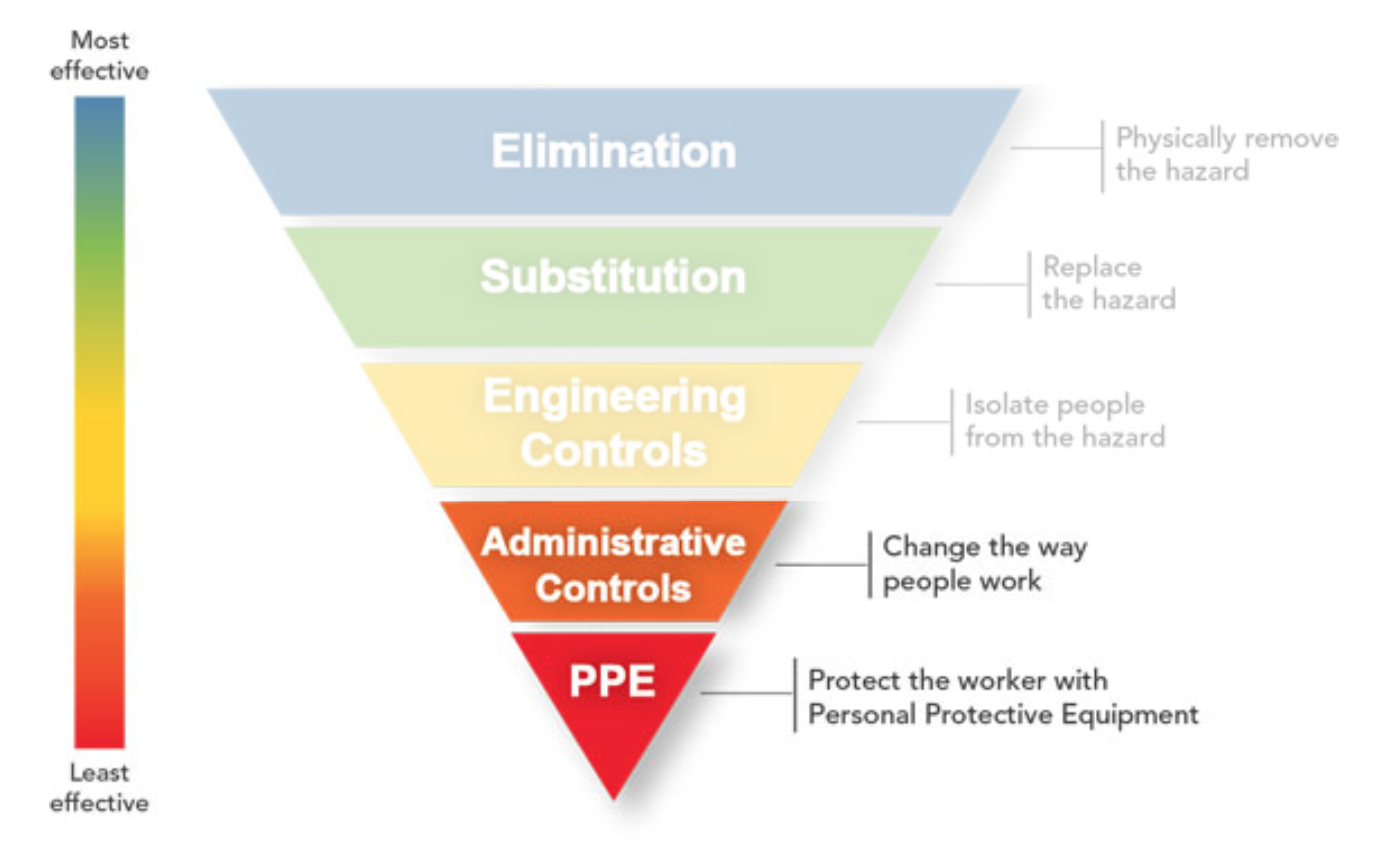 To make the implementation of the hierarchy of controls in an indoor inspection scenario more concrete, let’s take a closer look at examples for those first two levels (PPE and Administrative Controls).

In Oil and Gas, it’s common practice for inspectors and other personnel to use PPE like flame-resistant clothing, steel-toe boots, hard hats, and safety glasses.

And if an inspector is conducting a visual inspection of an asset like an FCC unit, which requires manned entry via rope access, they will also be required to use additional PPE, such as a harness, to keep themselves secure during the visual inspection.

Stepping up one level in the hierarchy of hazard controls, Administrative Controls could be put in place in this instance that would require the inspector’s harness to be systematically checked, or that all FCC unit inspections must follow a certain safety protocol, with a specified administrator or site manager required to sign off on a pre-inspection safety checklist.

These kinds of administrative controls are an improvement on the first step of simply using PPE, since they could help increase the likelihood that workers will use their PPE, as well as increasing awareness about common hazards in FFC unit inspections and how to avoid them.

But this is where the hierarchy of controls ends for manual indoor inspections.

To continue moving up the hierarchy and actually eliminate a hazard, you have to turn to robotics solutions like drones that can completely replace the need for a person to enter a confined space in order to collect visual data on its condition.

HOW DRONES FIT INTO THE HIERARCHY OF CONTROL

The most effective hazard control in the hierarchy of controls is Elimination—completely getting rid of the hazard to the worker.

But complete elimination of a hazard is a hard thing to accomplish, since it means that you have to completely replace the need for a person to be doing the hazardous task by having it performed some other way.

This is where drones come in.

[Related reading: Can a Drone Be Used as a Formal Inspection Tool?]

For example, for an API 510 Pressure Vessel Inspection an inspector would typically go into the pressure vessel in order to review its condition with the naked eye.

Most likely, the inspector will have to stand on scaffolding to complete the inspection, since the pressure vessel will be too tall for all of it to be accessible to their eye simply by standing on the floor of the vessel.

This means that inspectors face at least two hazards during their work: the need to enter a confined space, and the need to stand on scaffolding.

But an indoor drone made for inspections like the Elios 2 can replace the need for the inspector to physically enter the vessel for the purpose of visual inspections, thereby eliminating these hazards to the inspector.

It is important to note that not all drones can completely take the place of an inspector.

While some drones can provide support during indoor inspections, most drones on the market are not made for flying in confined spaces, and don’t have the unique cage design, collision tolerance, stabilization, bright lighting, and other features required to eliminate the need for an inspector to enter a confined space altogether.

It is also worth noting that using a drone for a visual inspection in a confined space only eliminates the hazard for the inspector. Those maintenance workers who will be called in to address any defects in the asset found during the inspection will still need to be exposed to the hazards listed above, since they’ll still need to enter the asset to perform their maintenance work.

Here are some examples of ways that the Elios 2 has eliminated hazards for inspectors conducting indoor inspection missions.

The TVA (Tennessee Valley Authority) used the Elios 2 to improve safety by eliminating the need for inspectors to enter a gas scrubber and stand on scaffolding erected 55 meters (80 feet) in the air at the Cumberland Fossil Plant.

Watch the video below or read the case study to learn more. DTEK, the largest private investor in the energy sector in Ukraine, used the Elios 2 for a chimney inspection at one of its power plants, eliminating the need for inspection personnel to climb 180 meters (590 feet) up the chimney.

Watch the video below or read the case study to learn more. Tüpraş, Turkey’s largest industrial enterprise and the 7th biggest refining company in Europe, used the Elios 2 to inspect an FCC unit, eliminating the need for inspectors to enter confined spaces in the riser and cyclones by rope access.