Given that the Elios 2’s battery lasts about 10 to 12 minutes, we often get the question: is that enough time?

The short answer is yes, it’s plenty of time—according to our customers, ten minutes is actually more than enough.

When considering the Elios 2’s ten minutes of battery life, it’s important to keep in mind that the Elios 2 is made for indoor flying, and primarily for indoor inspections.

If you were looking for a drone to fly outdoors for commercial work, ten minutes might just not be enough.

That’s because outdoor drone operations may require flying long distances in order to get all the data needed. Knowing you can only fly about five minutes out before you have to turn around and fly back could be a frustrating limitation.

Here are some examples of outdoor scenarios that might call for longer battery life:


As you can see, all of these outdoor scenarios call for long flights over large distances.

But when your goal is to collect visual data inside of an enclosed space for inspection purposes, it turns out you can accomplish a lot in ten minutes.

That’s because most indoor drone missions are conducted in spaces that just aren’t that big—at least, not compared with the distances covered in outdoor missions.

Even gigantic oil storage tanks, including those on oil tankers or on land, are still not so big that you can’t enter them, collect the visual data you need, and exit in under ten minutes. 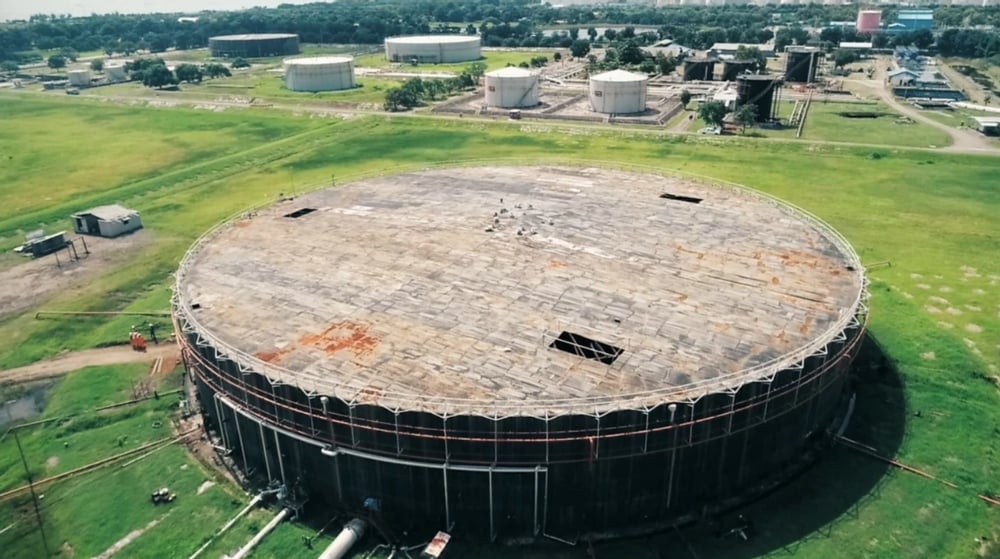 An oil storage tank that was inspected with the Elios 2

To get a sense for how far you can fly indoors in a short period of time, check out the first clip in the video below featuring footage captured by the Elios 2 as it flies up the length of a chimney that is 590 feet (180 meters) tall.

Learn more about how much can be accomplished with a ten minute battery life:

What Can You Accomplish in Ten Minutes When Flying Indoors?

Now that we’ve covered the battery life requirements for indoor versus outdoor flying, let’s take a closer look at what can be accomplished with ten minutes of battery life when flying indoors.

According to Ana Gamarra of Raptor UAS, one of the top providers of industrial drone inspections in the U.K., when it comes to indoor inspections with the Elios 2, ten minutes of battery life is more than enough time for anything you might need to do.

“Ten minutes of flight let’s you get everywhere. You can inspect anything and it’s not a problem.”

At Raptor UAS, Ana regularly conducts inspections of boilers, tanks, and other large assets, all of which require flying the Elios 2 indoors.

Ana is a certified Naval Architect who has in-depth experience in inspection work. She has completed many inspections trainings and holds several inspections-related qualifications.

Here is the list of considerations Ana recommends for conducting a site survey prior to a mission with the Elios 2: 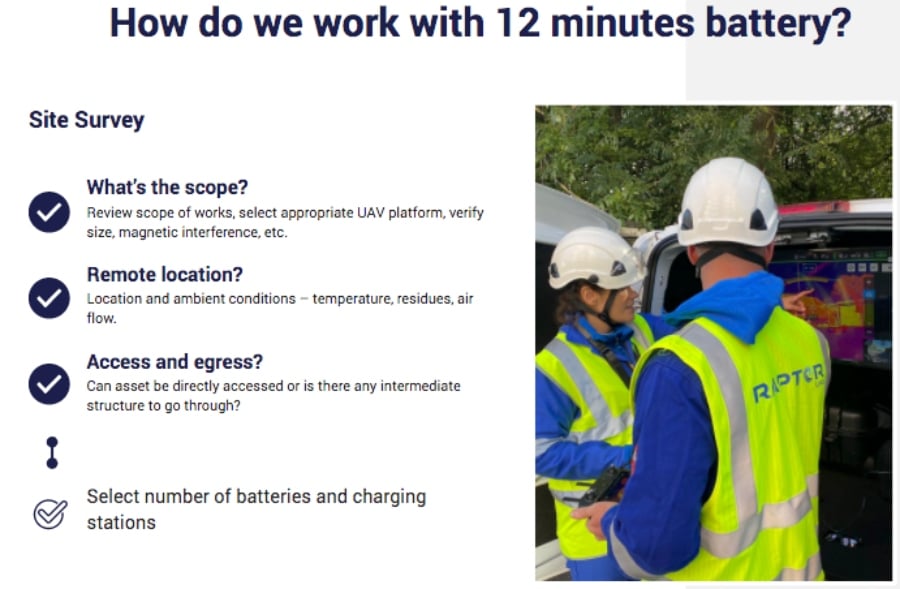 *Note: This image was taken from a presentation Ana made during a webinar on how to get the most out of the Elios 2’s battery life. Scroll down to view Ana’s full presentation.

[Want to know why the Elios 2’s battery life is 10-12 minutes long? Read this article to find out.]

According to George Burne of Coptrz, one of the U.K.'s leading experts on commercial drones, having a good workflow is key to maximizing the use of the Elios 2’s battery when conducting indoor inspections.

Here is the workflow George recommends:

As you can see, the overall framework of George’s workflow is to conduct your inspection in stages of detail, starting at the most general—flying the entire asset—and then drilling down—covering each specific area of interest—so that you ensure you’ve thoroughly reviewed the asset and collected enough visual data to satisfy inspection requirements.

Although this approach requires multiple flights, it also helps create a solid and structured approach to each inspection.

By breaking your inspection work down into the individual missions that can be completed with a single battery, you maximize the life of each battery while also allowing yourself the time needed to review data after each flight so you can proceed methodically, making sure you haven't missed anything that might call for further review within the asset as you go.

The information shared above from Ana Gamarra and George Burne was excerpted from presentations they did for a webinar we hosted entitled How to Get the Most Out of Your Drone’s Battery Life—Advice from Drone and Inspection Experts.


Want to jump around within the webinar? Here are links to Ana’s and George’s presentations: